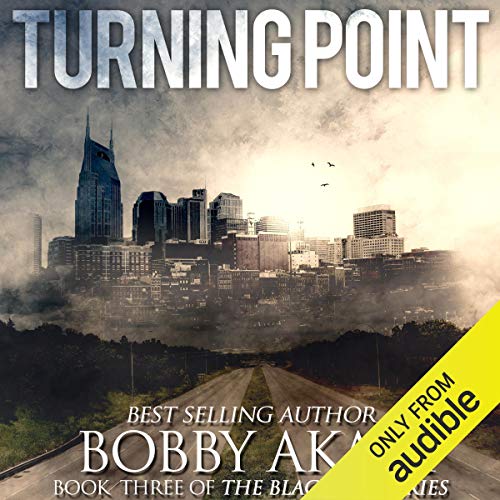 Life is always at a turning point...

when faced with a certain death...

would you be willing to seize the moment...

and do what it takes to survive?

Know this. You'll never know where the bend in the road might take you.

The new dystopian, post-apocalyptic fiction series from author Bobby Akart (The Boston Brahmin series and the Prepping for Tomorrow series) has been hailed as a masterpiece of prepper fiction. Prepare to learn, as well as be entertained as The Blackout Series continues with Turning Point.

In book one of this new post-apocalyptic survival fiction series, 36 Hours, the listener was provided a glimpse into the rapid decline of society once word of the catastrophic solar flare racing towards Earth began to spread.

Book two, Zero Hour, thrust our character into the perils of a post-apocalyptic world. At Zero Hour, an EMP caused by a massive solar flare left America in darkness. The Ryman family, who weren't preppers, applied common sense, logic, and a will to survive to their decision-making as they faced their death, their neighbors, and the depravity of man.

Now, in Turning Point, the characters face a life altering decision - should we stay or should we go? The oldest and strongest emotion in man is fear, and the strongest kind of fear is fear of the unknown. Will Americans flee the urban centers, the proverbial golden hordes, for the countryside? Will it be safer than the cities? Turning Point will lead the Ryman family into a complex, inexplicable world where danger lurks around every bend.

Note: This book does not contain strong language. It is intended to entertain and inform audiences of all ages, including teen and young adults.