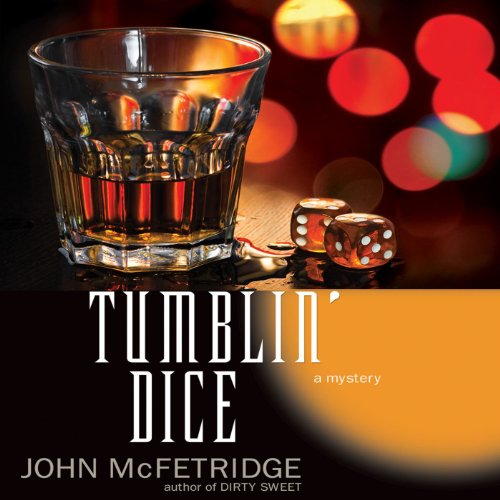 Actor William Dufris simmers with streetwise sleaziness performing this dialogue-driven crime drama. Tumblin’ Dice follows B-rate rock band The High as they reunite to play the casino nostalgia circuit. Very much in it for the money, vocalist Cliff and bassist Barry raise the stakes with a plan to plunder the loan sharks and drug dealers who hang outside the casinos. Author John McFetridge once again blurs the lines of morality, pitting his questionable characters amidst a series of dubious debacles. A BBC veteran and nine-time Audie Award finalist, Dufris lends authenticity to McFetridge’s unruly underworld. At turns seditious, selfish, and smutty, Dufris effortlessly personifies the band of down-and-out rockers throughout their adventures with badass bikers, low-life loan sharks, and winsome women.

The High, a band with a few hit songs in the late 1970s, have reunited to play the nostalgia circuit at casinos. But for bassist Barry and lead singer Cliff, this tour promises to be unforgettable and even more worthwhile than ever. In this fourth installment of the Toronto series, these two band members turn the tables on the gritty underworld of casinos, as they rob the loan sharks and drug dealers who work at every stop of the tour.

After finding their old manager, who had swindled millions from them years ago, Barry and Cliff decide to go for the big score and get it all back—and more. But when the Saints of Hell, the notoriously dangerous motorcycle gang, get involved, all bets are off.

"Canada’s answer to Elmore Leonard, John McFetridge is going places.... The title of [his] second crime novel is as packed with rascally attitude as the book itself." (Toronto Star)
"[McFetridge is] a clear disciple of Elmore Leonard.... a fun read." (Publishers Weekly)