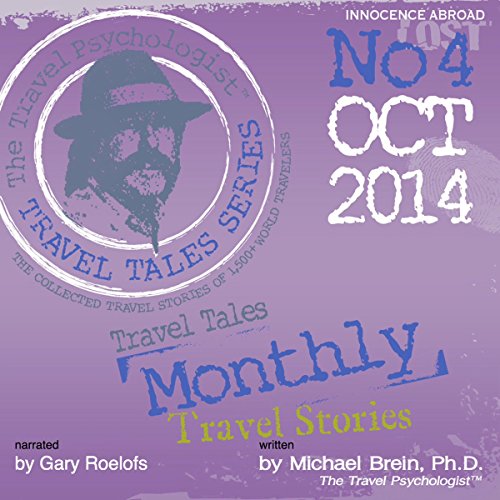 Michael Brein's Travel Tales Monthly bookazine Issue No. 4 for October 2014 contains among the best travel stories from Michael's huge collection of about 10,000 travel tales that he has gathered in interviews with nearly 1,750 world travelers and adventurers during his four decades of travel to more than 125 countries throughout the world. The 10 travel tales that are featured for October, as well as each following month, include a fascinating mix of travel stories as well as a few brief vignettes.

The October issue features such tales as "The Hug", "Les Ugly Americains", and "The Red Dodge", whereby travelers get themselves into trouble by behaving and acting in ways that make them "Persona Non-Grata" overseas. It is difficult enough to be culturally sensitive back home. But what are the consequences of being insensitive in a strange foreign land? What do you do? And, if that is not enough for you, how about "Run! Run!", our featured story for this month about an "ugly" American, who, in spite of himself, commits a series of simple cultural faux pas in Kathmandu, contrary to the good advice of a friend - a "beautiful" American this time - which gets out of hand and morphs into a very scary close call involving his worst nightmare and a possible threat to his life. You are going to consider this month what goes into being the "Good, Bad, and the Ugly" of travel. And you will also see some aspects of travel that you may not ever have considered before. And, once again, you will certainly experience vicariously those odd vagaries of travel-life that can await you and can suddenly appear just around the corner at about any turn along the way.