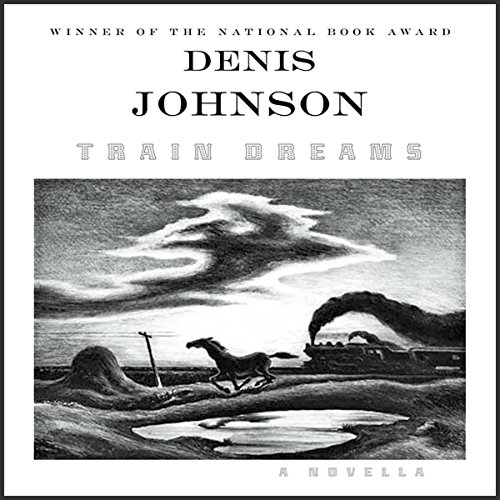 Denis Johnson’s Train Dreams is an epic in miniature, one of his most evocative and poignant fictions.

Robert Grainer is a day laborer in the American West at the start of the 20th century—an ordinary man in extraordinary times. Buffeted by the loss of his family, Grainer struggles to make sense of this strange new world. As his story unfolds, we witness both his shocking personal defeats and the radical changes that transform America in his lifetime. Suffused with the history and landscapes of the American West—its otherworldly flora and fauna, its rugged loggers and bridge builders—the new novella by the National Book Award-winning author of Tree of Smoke captures the disappearance of a distinctly American way of life.

“[A] severely lovely tale . . . The visionary, miraculous element in Johnson’s deceptively tough realism makes beautiful appearances in this book…The hard, declarative sentences keep their powder dry for pages at a time, and then suddenly flare into lyricism; the natural world of the American West is examined, logged, and frequently transfigured.” (James Wood, The New Yorker)
“An ode to the vanished West that captures the splendor of the Rockies as much as the small human mysteries that pass through them, this svelte stand-alone has the virtue of being a gem in itself, and, for the uninitiated, a perfect introduction to Johnson.” ( Publisher’s Weekly)
“National Book Award-winner Johnson, ever the literary shape-shifter, looks back to America’s expansionist fever dream in a haunting frontier ballad about a loner named Robert Granier . . . Johnson draws on history and tall tales to adroitly infuse one contemplative man’s solitary life with the boundless mysteries of nature and the havoc of humankind’s breakneck technological insurgency, creating a concentrated, reverberating tale of ravishing solemnity and molten lyricism.” (Donna Seaman, Booklist)