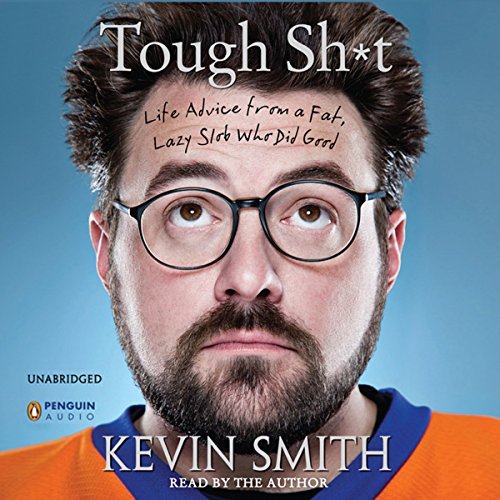 Profane, honest, and totally real advice from comedian and director Kevin Smith - one of America's most original voices....

Take one look at Kevin Smith: He's a balding fatty who wears a size XXL hockey jersey, shorts, and slippers year-round. Not a likely source for life advice. But take a second look at Kevin Smith: He changed filmmaking forever when he was 24 with the release of Clerks, and since then has gone on to make nine more profitable movies, runs his own production company, wrote a best-selling graphic novel, and has a beautiful wife and kids. So he must be doing something right.

As Kevin's millions of Twitter followers and millions of podcast listeners know, he's the first one to admit his flaws and the last one to care about them. In early 2011, he began using his platform to answer big questions from fans - like "What should I do with my life?"- and he discovered that he had a lot to say. Tough Sh-t distills his four decades of breaking all the rules down to direct and brutally honest advice, including:

For anyone who's out of a job, out of luck, or just out of sugary snack foods, Tough Sh*t is an unabashedly honest guide to getting the most out of doing the least.

In This audiobook - except the first half hour - you unfortunately won`t find any "Tough Sh-t" at all. It is mainly about the fat, lazy slobs doing good in the film business after his success film "clerks".
This is no self-(or other people-)help-book at all.

Doesn t mean it won t please you cuz the fat m.f. is really funny sometimes and talkin some real sh-t. But I personally was expecting s.th. completely different.

The title is misleading. Still... compliment for the first half hour of his literary "work".