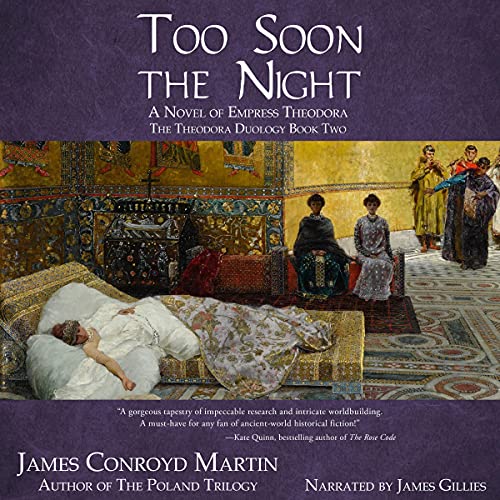 Too Soon the Night

"A gorgeous tapestry of impeccable research and intricate worldbuilding." (Kate Quinn, author of The Empress of Rome series)

Although Too Soon the Night can be listened to as a stand-alone novel, it continues the story of Theodora, as told by eunuch Stephen, where Fortune’s Child leaves off: after her marriage to Justinian and her taking a new stage as Empress of the New Rome.

Together, Justinian and Theodora reach for greatness, albeit in different areas: Justinian aims to simplify thousands of old Roman laws into one codex, as well as reconquer Rome and other lands lost to barbarians. Theodora longs to close the chasm between two religious beliefs, establish significant rights for women, and ensure that the Justinian-Theodora bloodline continues.

Unforeseen cataclysmic events with which the royal pair must contend include the first worldwide pandemic and a city uprising that places their dual throne and very lives at risk.