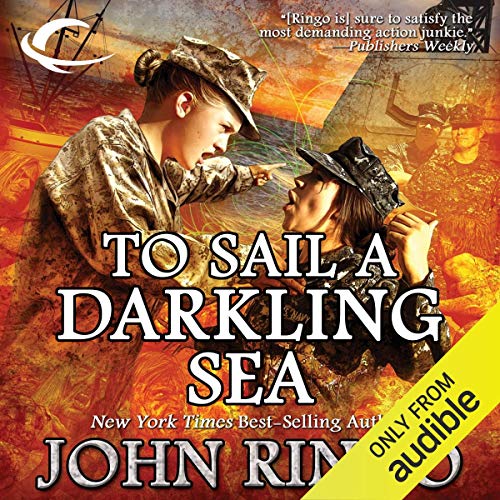 To Sail a Darkling Sea

A family of survivors fights back against a zombie plague that has brought down civilization.

A world cloaked in darkness

With human civilization annihilated by a biological zombie plague, a ragtag fleet of yachts and freighters known as Wolf Squadron scours the Atlantic, searching for survivors. Within every abandoned liner and carrier lurks a potential horde, safety can never be taken for granted, and death and turning into one of the enemy is only a moment away.

Yet every ship and town holds the flickering hope of survivors. One and two from lifeboats, a dozen from a fishing village, a few hundred wrenched by fury and fire from a ship that once housed thousands....

Now Wolf Squadron must take on another massive challenge: clear the assault carrier USS Iwo Jima of infected before the trapped Marines and sailors succumb to starvation. If Wolf Squadron can accomplish that task, an even tougher trial awaits: an apocalyptic battle to win a new dawn for humanity. The war for civilization begins as the boats of the Wolf Squadron become a beacon of hope on a Darkling Sea.

I like most of the books by John Ringo. As with "Graveyard Sky", this is a well-thought out Zombie novel, with lots of Zombie killings, heroic heroines etc. Lovely light entertainment.