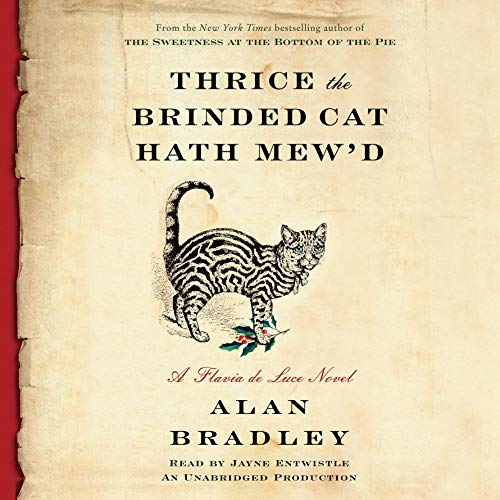 Hailed as "a combination of Eloise and Sherlock Holmes" by The Boston Globe, Flavia de Luce returns in a much anticipated new Christmas mystery from award-winning and New York Times best-selling author Alan Bradley.

In spite of being ejected from Miss Bodycote's Female Academy in Canada, 12-year-old Flavia de Luce is excited to be sailing home to England. But instead of a joyous homecoming, she is greeted on the docks with unfortunate news: Her father has fallen ill, and a hospital visit will have to wait while he rests. But with Flavia's blasted sisters and insufferable cousin underfoot, Buckshaw now seems both too empty - and not empty enough.

Only too eager to run an errand for the vicar's wife, Flavia hops on her trusty bicycle, Gladys, to deliver a message to a reclusive wood-carver. Finding the front door ajar, Flavia enters and stumbles upon the poor man's body hanging upside down on the back of his bedroom door. The only living creature in the house is a feline that shows little interest in the disturbing scene. Curiosity may not kill this cat, but Flavia is energized at the prospect of a new investigation. It's amazing what the discovery of a corpse can do for one's spirits. But what awaits Flavia will shake her to the very core.

"Narrator Jayne Entwistle is rousing in this eighth Flavia de Luce novel.... Entwistle's Flavia is unruffled, while her inner dialogue is fascinating as she searches for clues. Entwistle artfully captures Dogger, Mr. de Luce's servant and Flavia's great friend, and Mrs. Bannerman, with her warm Canadian accent, as she helps Flavia research her theories. Audio is the perfect format." ( AudioFile)