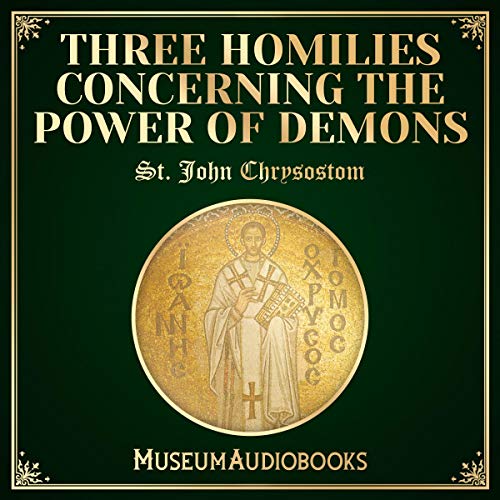 Saint John Chrysostom (c. 349-407), Archbishop of Constantinople, was an important Early Church Father. These three homilies deal with errors against, which Chrysostom contended all his life. It is assumed that they were delivered at Antioch when Chrysostom was a presbyter under the Episcopate of Flavian. Chrysostom opposed the idea that the world was abandoned to the dominion of devils, insisting very boldly on the freedom of will, moral responsibility, and the duty of vigorously resisting temptation. In these and many other homilies, he denounces the doctrine that evil was an original integral part of human nature, maintaining that it is not a substantial inherent force. Chrysostom asserts that humanity’s first parents stumbled through indolence of moral purpose, which is the principal root of sin. He argues that despair is the devil's most potent weapon wielded against mankind, as it prevents individuals from rising again after they have fallen.

Museum Audiobooks strives to present audiobook versions of authentic, unabridged historical texts from prior eras which contain a variety of points of view. The texts do not represent the views or opinions of Museum Audiobooks, and in certain cases may contain perspectives or language that is objectionable to the modern listener.