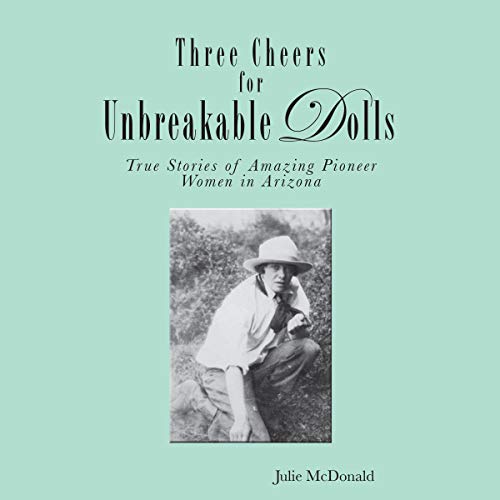 Sarah Ashurst, who tied her two-year-old daughter Eve to a wagon wheel so that she wouldn't wander off while she gave birth, unassisted, to the baby that would become Arizona's first senator. That was only the beginning of Sarah's adventures as she and her family headed to the Arizona territory!

Kate Lyall, a single mother with four children homesteaded in Southern Arizona in Doubtful Canyon, so named because early pioneers were "doubtful" they would survive. Martha Purtymun baked a saw into a cake to help her father, the very colorful Bear Howard, escape from jail. Bear then left California and headed to Oak Creek Canyon, Arizona, a good place to hide from the law!

Guadalupe Vasquez and her husband fled Mexico to escape Pancho Villa to find a new life in Flagstaff, Arizona. This is a sweet story!

Cecil Creswell, who changed her name three different times and ran away from home at the age of 14. She eventually arrived in Winslow, Arizona, to work as a Harvey girl. Her cowboy skills, roping, and riding launched her into a new career as a cattle thief.

Katherine Beard came on the railroad from Kansas to work on the Navajo and Hopi reservations. She arrived full of hopes and dreams and in the first year was a virtual prisoner high atop a mesa. Her story of continued perseverance is inspiring!

With each story of these remarkable women, the author has paired a complementary humorous short story about the good ol' days in Arizona penned by the author's father in the 1960s and '70s.