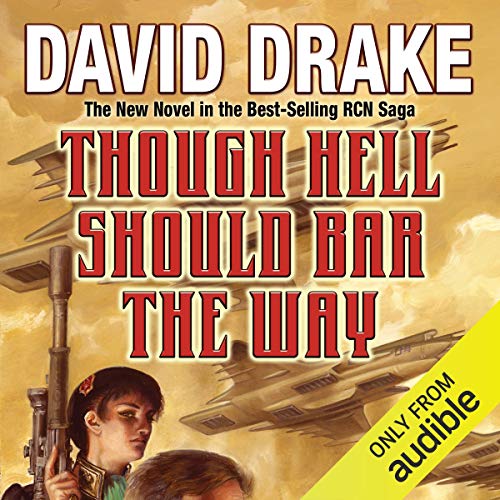 Though Hell Should Bar the Way

Though Hell Should Bar the Way

David Drake, dean of military science fiction, returns with another entry in his best-selling RCN series.

From wealth and power to poverty and insults!

Roy Olfetrie planned to be an officer in the Republic of Cinnabar Navy, but when his father was unmasked as a white-collar criminal he had to take whatever he was offered.

What is offered turns out to be a chance to accompany Captain Daniel Leary and Lady Adele Mundy as they go off to start a war that will put Roy at the sharp end.

Duty snatches Roy from the harem of a pirate chief to a world of monsters, from interstellar reaches in a half-wrecked starship to assassination attempts at posh houses. Roy has the choice of making friends or dying friendless; of meeting betrayal and responding to it; of breaking his faith or keeping it at the risk of his life.

Pirates, politics, and spies - and, waiting for Roy if he survives all the rest, a powerful warship.

The action doesn't slow - nor can Roy, for if he does the only question is which of the many threats will be the one to catch and kill him. But Captain Leary himself has given Roy a chance, and Roy is determined make the most of it - Though Hell Should Bar the Way.