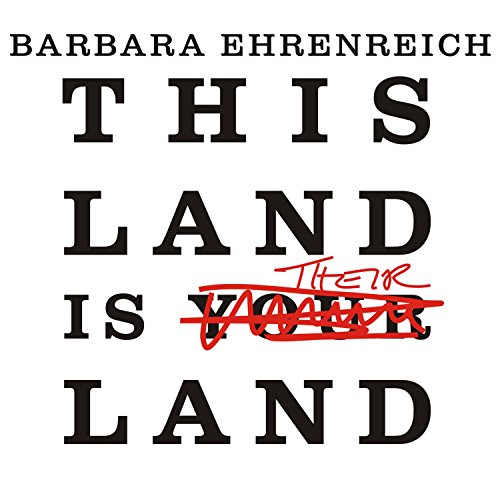 This Land Is Their Land

In this collection of short essays, Ehrenreich takes on her usual topics - economic and social injustice, the exploitation of the poor by the rich, the diminishment of American freedoms and of the middle class - all from her usual strongly populist viewpoint. Cassandra Campbell's voice is pleasant and professional. Perhaps it's too soothing - it could have a bit more edge, given Ehrenreich's nearly constant use of sardonic mockery, satire, and plain old disdain. Misreadings and mispronunciations, while few, are glaring. Still, Campbell expresses the feelings the text conveys (though never very strongly), modulates her voice skillfully, and is easy to listen to. The listener will recall the audio more than the print reader, which is perhaps not a bad thing.

Barbara Ehrenreich's first book of satirical commentary, The Worst Years of Our Lives, which was about the Reagan era, was received with best-selling acclaim. The one problem was the title: couldn't some prophetic fact-checker have seen that the worst years of our lives - far worse - were still to come?

Here they are, the 2000s, and in This Land Is Their Land, Ehrenreich subjects them to the most biting and incisive satire of her career.

Taking the measure of what we are left with after the cruelest decade in memory, Ehrenreich finds lurid extremes all around. While members of the moneyed elite can buy congressmen, many in the working class can barely buy lunch. While a wealthy minority obsessively consumes cosmetic surgery, the poor often go without health care for their children. And while the corporate C-suites are now nests of criminality, the less fortunate are fed a diet of morality, marriage, and abstinence.

Ehrenreich's antidotes are as sardonic as they are spot-on: pet insurance for your kids; Salvation Army fashions for those who can no longer afford Wal-Mart; and boundless rage against those who have given us a nation scarred by deepening inequality, corroded by distrust, and shamed by its official cruelty.

Das sagen andere Hörer zu This Land Is Their Land