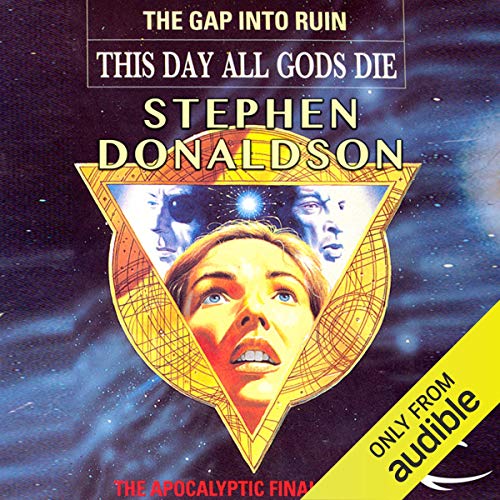 This Day All Gods Must Die: The Gap into Ruin

This Day All Gods Must Die: The Gap into Ruin

Hailed as his greatest work ever, Stephen Donaldson's best-selling Gap series is rapidly attaining the status of a classic. Now, one of the most exhilarating space epics ever told comes to a shattering climax in a thrilling tale of high adventure, powerful emotion, and labryrinthine intrigue.

As the conflict between humankind and the Amnion aliens heads for crisis, Morn Hyland, cyborg Angus Thermopyle, and the survivors on board the crippled starship Trumpet must return from deep space to Earth. Only they can prevent the titanic struggle between UMCP director Warden Dios and Holt Fasner, the corrupt head of the UMC, from precipitating all-out war with the Amnion - and leaving humanity to pay a terrible price.

As Dios in Earth's orbit and Morn in deep space both make far-reaching decisions, the Amnion act with swift fury, and suddenly Earth stands threatened with fiery destruction.