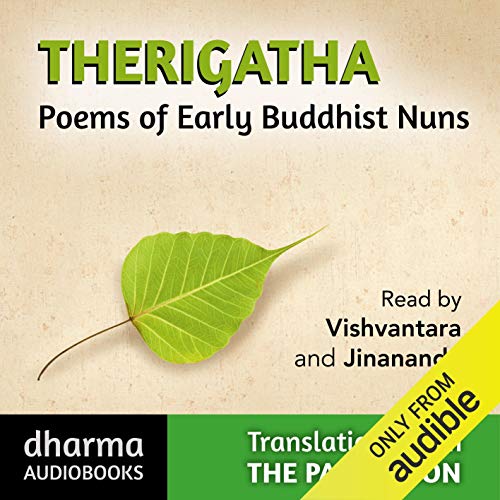 This remarkable collection of 73 verses contained in the 'Khuddaka Nikaya' section of the Pali Canon dates from the BC 6th century. It is said to be the earliest voices of women in recorded history. The verses, some brief, some more extended, are the utterances of the bhikkhunis, the nuns at the time of the Buddha, concerning their life and their ‘awakening’.

Often they give a penetrating insight to the life of women in ancient India: high-ranking members of courts, courtesans, wives of merchants and farmers - women from all social levels who left their homes to follow the spiritual life as forest renunciants.

This recording also includes the personal histories of many of the individuals written by the 6th century CE monk Dharmapala who had access to sources which are now lost. Among these individuals are some famous bhikkhunis whose stories are more widely known, including Kisagotami (and the mustard seed), Mahapajapati Gotami (the first woman to request ordination from the Buddha), and Dhammadinna (once praised by the Buddha for her Dhamma talk).