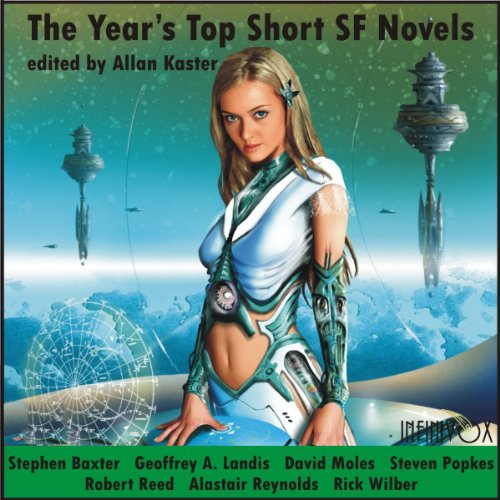 Short novels may well be the perfect length for science-fiction stories. They are movie-length tales that resonate with moxie while fully exploring characters, new worlds, and ideas. The stories in this unabridged audio collection are the best-of-the-best short science-fiction novels published in 2010 by current and emerging masters of this form.

"Return to Titan," by Stephen Baxter, is set in the Xeelee universe. Michael Poole and his father search one of Saturn's moons for sentient life that would interfere with their plans to build a gateway to the stars.

In this year's Theodore Sturgeon Memorial Award winner for best short fiction, "The Sultan of the Clouds," by Geoffrey A. Landis, a terraforming expert is inexplicably invited to Venus by the child who owns most of the planet's habitable floating cities.

"Seven Cities of Gold," by David Mole, tells the story of a Japanese relief worker charges with tracking down the renegade Christian leader responsible for fetonating a nuclear device in an Islam-occupied North American city.

In Jackie's-Boy," by Steven Popkes, an orphaned child befriends an uplifted elephant from the abandoned St. Louis Zoo as they trek south across a sparsely populated North America to find sanctuary.

"A History of Terraforming," by Robert Reed, involves a young boy's ambition to take up his father's work of terraforming Mars and then much of the solar system and discovers that much more than planets have been altered.

In "Troika," by Alastair Reynolds, the lone survivor of a mission that explores a massive alien object attempts to reveal what he discovered despite the wishes of the Second Soviet Union. Set in the author's S'hdonni universe,

"Several Items of Interest," by Rick Wilber, the Earth ruling aliens enlist a human collaborator to help quell a human rebellion led by the collaborator's brother.