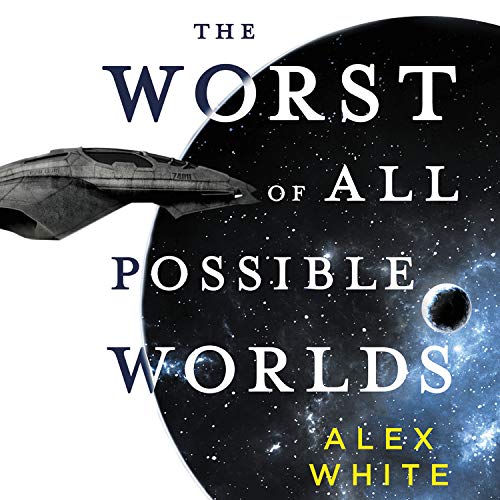 The Worst of All Possible Worlds

The rag-tag crew of the Capricious hunts down rogue AI, ancient colony ships, and the biggest treasure in the universe in this pulse-pounding space adventure for fans of Firefly and The Expanse.

The crew of the Capricious seems to leave a trail of devastation wherever they go. But with powerful enemies in pursuit and family and friends under attack planetside, there's no time to worry about all that. Ensnared by the legend of Origin, humanity's birthplace, and a long-dead form of magic, the Capricious takes off on a journey to find the first colony ship...and power that could bring down gods.

Listen to the incredible space-fantasy series that V. E. Schwab calls "a total blast", The Salvagers:

"Fast, compelling, epic in scope, with stakes that just keep getting higher and tension that mounts and mounts to the breaking point. A Bad Deal for the Whole Galaxy is excellently paced, with engaging characters and worldbuilding that crams as much fun cool shit in as seems remotely possible. It's a deeply enjoyable ride. I recommend it and its predecessor heartily." (Locus)

"A clever fusion of magic and sci-fi makes this book a total blast. I was hooked from page one." (V. E. Schwab, author of the Shades of Magic series on A Big Ship at the Edge of the Universe)

"A Big Ship at the Edge of the Universe is perfectly paced, full of intense, inventive action and refreshingly honest characters. It's the seamless hybrid of fantasy and sci-fi that you didn't know you always needed. Do you miss Firefly? Do you want it back? Well, sorry, not gonna happen. But this book is damn close." (Nicholas Eames, author of Kings of the Wyld)