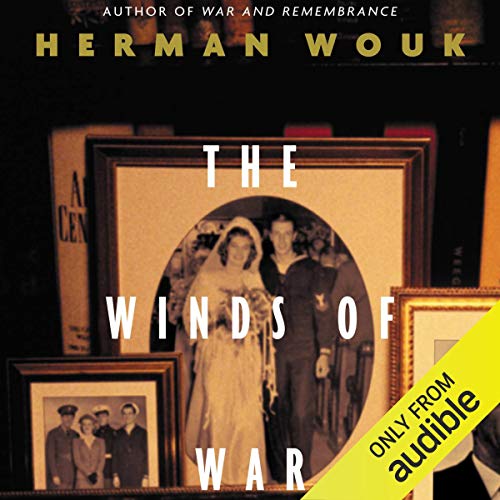 The Winds of War

A masterpiece of historical fiction, this is the Great Novel of America's "Greatest Generation".

Herman Wouk's sweeping epic of World War II, which begins with The Winds of War and continues in War and Remembrance, stands as the crowning achievement of one of America's most celebrated storytellers. Like no other books about the war, Wouk's spellbinding narrative captures the tide of global events - and all the drama, romance, heroism, and tragedy of World War II - as it immerses us in the lives of a single American family drawn into the very center of the war's maelstrom.

Also listen to War and Remembrance.

"Wouk's real genius lies not just in the narrative power of his books, but in his empathy with the people and the times of which he writes…. The genius of The Winds of War and War and Remembrance is that they not only tell the story of the Holocaust, but tell it within the context of World War II, without which there is no understanding it." ( The Washington Post)

Was hat Ihnen am allerbesten an The Winds of War gefallen?

An epic novel on WWII

Winds of War followed by War and Remembrance are very well researched and composed novels on the 2nd WW. The story about the Henry family, their friends and relatives throughout the complete WWII also provides a good overview on what happened during that period of time. Everybody interested in the history of WWII not wanting to read through big volumes of history books to get a good understanding of that time could alternatively listen in and enjoy more than 100 hours of exciting entertainment. The books were written in the 1960ies and remain classics like the Cane Mutiny from the same author, Herman Wouk. He is still alive according to Wikipedia and now aged 102 years.