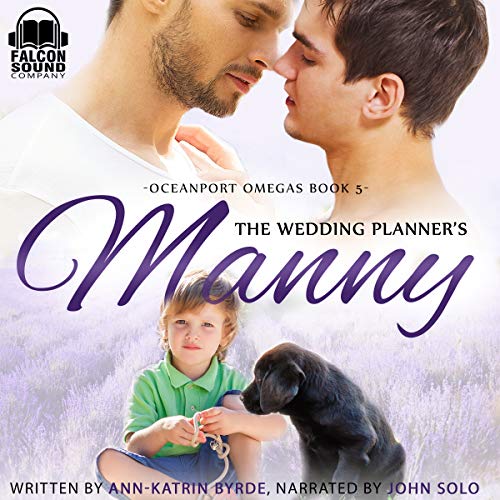 When Rhys returned to his hometown, he thought he’d escaped his abusive cultist husband, but shortly after settling back into Oceanport, he discovers he’s pregnant - from his ex. Determined to give his baby a good life and to do it without his ex’s knowledge, Rhys needs a job. Luckily,
his brother’s wedding planner needs a manny. Which sounds perfect, until Rhys shows up for the interview and he realizes his new boss used to be his secret childhood crush.

Ethan spends his life planning everyone else’s happy ever afters - too bad he can’t make that work for his own life. He certainly never planned for his wife to walk out on him, or to end up the single father of two boys, yet somehow that’s where he’s found himself. But if it’s hard on him, it’s worse for his sons. Emotionally wounded, 3-year-old Caleb’s struggled in every daycare Ethan’s tried, and 12-year-old Nathan’s chased off every nanny Ethan’s hired in between. Ethan needs someone special, who can bridge the growing gap between him and the boys and make them whole again.

In Rhys, Ethan finally finds that someone. But as he watches Rhys slowly knit his family back together, he finds himself falling for the courageous young omega. Only, Rhys is still healing himself from his last relationship, and so is Ethan. It looks hopeless. But Rhys is done running, and Ethan has a plan - can they create their own happy ending from the ashes of their past?