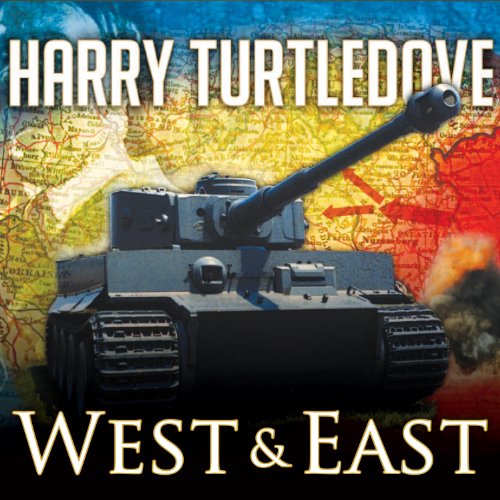 The War That Came Early: West and East

The War That Came Early: West and East

In 1938, two men held history in their hands. One was Adolf Hitler. The other was British prime minister Neville Chamberlain, who, determined to avoid war at any cost, came to be known as "the great appeaser". But Harry Turtledove, the unrivaled master of alternate history, has launched a gripping saga that springboards from a different fateful act: What if Chamberlain had stood up to Hitler? What would the Nazis' next move have been? And how would the war---which Hitler had always regretted waiting 11 months to start---have unfolded and changed our world?

Here, Turtledove takes us across a panorama of conflict fueled by ideology and demagoguery. Nations are pitted against nations, alliances are forged between old enemies, ordinary men and women are hurled into extraordinary life-and-death situations.

In Japanese-controlled Singapore, an American marine falls in love with a Russian dance-hall hostess, while around him are heard the first explosions of Chinese guerilla resistance. On the frontlines of war-ravaged rural France, a weary soldier perfects the art of using an enormous anti-tank gun as a sniper's tool---while from Germany a killer is sent to hunt him down. And in the icy North Atlantic, a U-boat bearing an experimental device wreaks havoc on British shipping, setting the stage for a Nazi ground invasion of Denmark.

From an American woman trapped in Germany who receives safe passage from Hitler himself to a Jewish family steeped in German culture and facing the hatred rising around them, from Japanese soldiers on the remote edge of Siberia to American volunteers in Spain, The War That Came Early: West and East is the story of a world held hostage by tyrants - Stalin, Hitler, Sanjuro - each holding on to power through lies and terror, even in the face of treacherous plots from within.

"And so it whirls on, the suspense building inexorably, thanks to two of Turtledove’s gifts, in particular. One is for portraying so much of the action from the viewpoint of the grunts, or even civilians, who know little of what the Great Ones are up to until the consequences are all over them. The other proceeds from the first and is for envisioning WWII unraveling like an endless ball of yarn in the paws of an intelligent kitten. Keep reading or miss something exceedingly fine." ( Booklist)