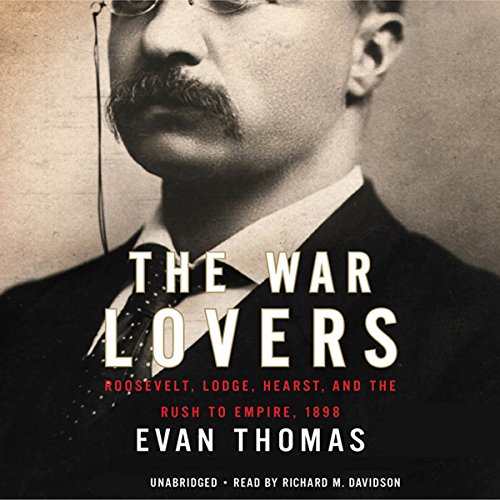 On February 15, 1898, the USS Maine exploded in Havana Harbor. Although there was no evidence that the Spanish were responsible, yellow newspapers such as William Randolph Hearst's New York Journal whipped Americans into a frenzy by claiming that Spain's "secret infernal machine" had destroyed the battleship. Soon after, the blandly handsome and easily influenced President McKinley declared war, sending troops not only to Cuba but also to the Philippines, Spain's sprawling colony on the other side of the world.

As Evan Thomas reveals in his rip-roaring history of those times, the hunger for war had begun years earlier. Depressed by the "closing" of the Western frontier and embracing theories of social Darwinism, a group of warmongers that included a young Teddy Roosevelt and Henry Cabot Lodge agitated loudly and incessantly that the United States exert its influence across the seas. These hawks would transform American foreign policy and, when Teddy ascended to the presidency, commence with a devastating war without reason, concocted within the White House - a bloody conflict that would come at tremendous cost.

Thrillingly written and brilliantly researched, The War Lovers is the story of six men at the center of a transforming event in U.S. history: Roosevelt, Lodge, Hearst, McKinley, William James, and Thomas Reed, and confirms once more that Evan Thomas is a popular historian of the first rank.

"Thomas's thesis is bold and will undoubtedly be controversial, but his protagonists make for rich psychological portraiture, and the book serves as an illuminating case study in the sociocultural underpinnings of American military adventurism." ( Publishers Weekly)
"Evan Thomas is a national resource, and this utterly compelling book reminds us why....Most of all, Thomas's book suggests vital lessons for our generation of American leaders and citizens to take very seriously as we confront some of the same public challenges that faced Theodore Roosevelt and his contemporaries." (Michael Beschloss)