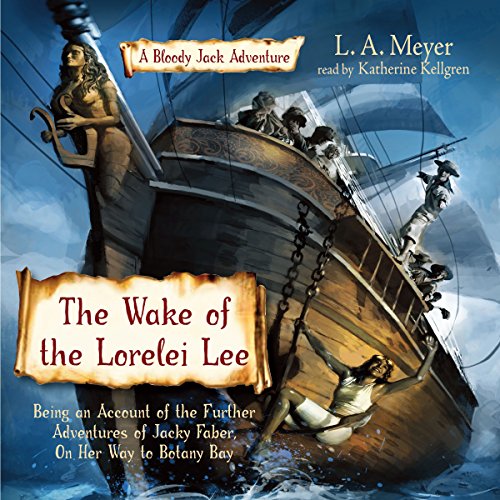 The Wake of the Lorelei Lee

The Wake of the Lorelei Lee

Jacky Faber, rich from her exploits diving for Spanish gold, has purchased the Lorelei Lee to carry passengers across the Atlantic. Believing she has been absolved of past sins against the Crown, Jacky docks in London to take on her crew, but is instead arrested and sentenced to life in the newly formed penal colony in Australia. To add insult to injury, the Lorelei Lee is confiscated to carry Jacky and more than 200 female convicts to populate New South Wales.

Not one to give in to self pity, Jacky rallies her sisters to "better" their position - resulting in wild escapades, brushes with danger, and much hilarity. Will Jacky find herself a founding mother of New South Wales, Australia? Not if she has anything to do about it!

L. A. Meyer received a master of fine arts from Boston University, and is currently the curator and exhibitor at the Clair de Loon Gallery in Bar Harbor, Maine. He lives in Corea, Maine. Katherine Kellgren has recorded over 60 audiobooks including Bloody Jack, which won an Audie Award, a Publishers Weekly Listen Up Award, and ForeWord magazine's Audiobook of the Year.