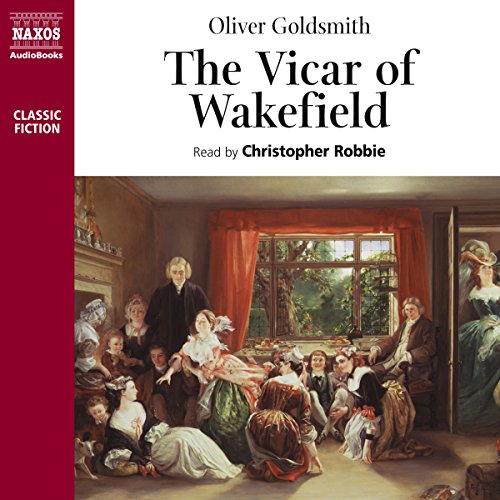 The Vicar of Wakefield

Oliver Goldsmith's short 1766 novel, is a humorous, sentimental, melodramatic fairy tale - a pious vicar, Dr. Primrose, relates his and his (sometimes feckless) family's travails and changing fortunes. Christopher Robbie reads with the rhetorical formality we would expect of the period and character, and skillfully conveys the vicar's innocent propriety. Robbie also captures Primrose's occasional naïveté and silliness, while keeping him sympathetic. While his voice is pleasant and expressive, his one fault is a nearly constant quaver, as if Primrose were infirm or always on the verge of tears. This is much reduced when he takes on other voices but, nonetheless, mars a fine performance.

First published in 1766 and a perennial favourite since then, The Vicar of Wakefield is built around the naive but loveable figure of Dr. Primrose. He and his family live in rural bliss until disaster threatens to destroy their happiness: abduction, impoverishment, and betrayal combine to lay them low, but a surprising figure brings hope when all seems lost...