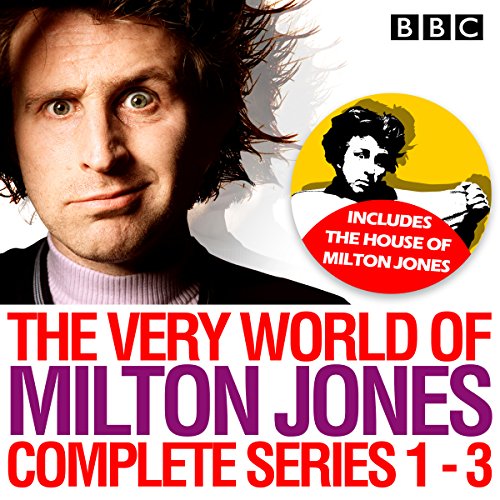 Milton Jones, Milton Jones - so good, they named him. The most popular living comedian on Radio 4 and officially Britain's funniest Milton is here with the complete three series of his award-wining show that leapt from late night to prime time - a show which costars regular guests Alexander Armstrong (Pointless, Armstrong & Miller), Dave Lamb (the voice of Come Dine with Me) and Joanna Scanlan (The Thick of It, Getting On).

No-one knows where he's from - "as a child, I always remember my father saying to me, 'Son, to pay for your education your mother and I had to make a lot of sacrifices'. Because they were both druids." No-one can predict what he gets up to - "I'm not getting on with my yoga teacher at the moment...which frequently puts me in a very difficult position". And no-one can tell what made him the way he is - "you see when the boys in the playground found out that I had a potentially fatal allergy to peanuts they used to shove me up against a wall and make me play Russian roulette with a bag of Revels". Each week, Milton Jones faces his own death. His life flashes before his eyes. We hear everything that's happened to him and anything that might have happened to him. His hopes, his dreams, his fears. We invite you to enter the Sony Award-winning The Very World of Milton Jones. Your mind will never be the same again.

The show is also a hotbed for writers who went on to fame and fortune with contributions from Tony Roche (The Thick of It, Veep) Jon Holmes (The Now Show), Mark Evans (Bleak Expectations)and James Bachman (Mitchell & Webb).

Milton stars in his own sitcom set in a houseshare with his sister Susan (Olivia Colman - Peep Show), her slightly useless husband Ian and his daffy Aunt Dilys (Rosemary Leach) whilst in the basement lives the ever-smooth Anton (Tom Goodman-Hill - Humans, Mr. Selfridge).

"He's immensely quotable, chucking out one-liners like bread for brids... A strange and brilliant comic mind." ( The Observer)
"...makes the studio audience whoop with delight." ( The Telegraph)
"If you haven't caught up with Jones yet - do so!" ( Daily Mail)