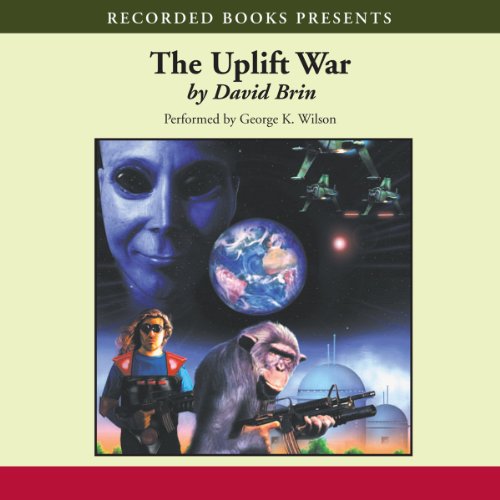 David Brin's New York Times best-selling novels thrill listeners with their stirring adventures and intriguing speculation about humanity's future. Set in a universe where no species has reached sentience without the "uplifting" help of a patron race, the books delve into the greatest mystery of all: Who uplifted humankind?

Earth has been allowed to colonize the planet Garth only because its previous occupants went berserk and wiped out virtually all life there. But now humans, chimps, and their alien allies on Garth are being held hostage in a conflict that could affect the fate of the entire Five Galaxies. As a ragtag group of freedom fighters wage a desperate guerilla war, their only hope for victory lies in unravelling the elusive truth behind the legend of a hidden native species that could prove a powerful ally.

The Uplift War provides entertainment in the grandest tradition of science fiction, with exotic aliens, visionary action, and universe-encompassing mysteries.

"The Uplift books are as compulsive reading as anything ever published in the genre." ( The Encyclopedia of Science Fiction)