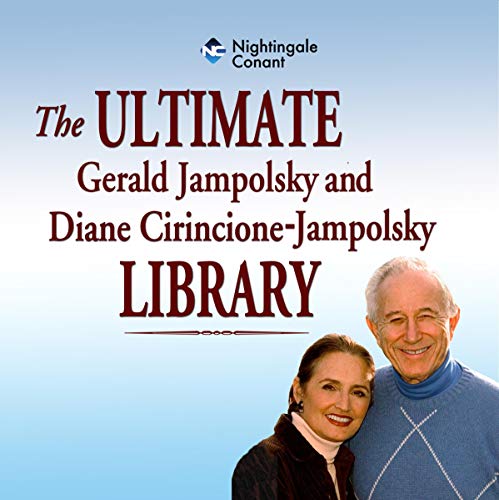 In this unforgettable collection of great ideas in sound, recorded over the span of four decades, you’ll hear some of the best spiritual wisdom from two of America’s most well-renowned and gifted spiritual thinkers and practitioners.

Jerry Jampolsky is the inspiration behind a revolutionary process he calls Attitudinal Healing. A graduate of Stanford University’s School of Medicine, and a world-renowned psychiatrist, Jerry established the first Center for Attitudinal Healing in Marin County, California in 1975 so that people of all ages, faiths, and cultures who are facing illness, catastrophic events, loss, and life challenges could have free support services. Since then, a global network of Centers in dozens countries have emerged.

In 1982 Jerry founded the international project Children as Teachers of Peace, a program that offered children an opportunity to express their feelings, ideas, fears, and hopes for a better world. In 1987 Jerry co-founded the AIDS Hotline for Kids. He has also been honored with several international awards including the AMA Excellence in Medicine - Pride in the Profession Award.

Diane Cirincione-Jampolsky is the Founder and Executive Director of Attitudinal Healing International, and has committed her life to the teachings of unconditional love and forgiveness. She holds a Masters in Counseling Psychology and a PhD in Clinical Psychology. Diane is a businesswoman, therapist, international lecturer, and has worked in 61 countries and lectured in universities and organizations around the world. From 1982-1992 Diane traveled to Russia, China, and Central America through the project Children as Teachers of Peace, helping to support youth in conflict-torn countries. Diane is the co-producer of three documentaries and is the recipient of over a dozen international humanitarian awards with Dr. Jampolsky.

Together this amazing married couple recorded several best-selling audio Nightingale-Conant audio programs, including: Attaining Inner Peace, Goodbye to Guilt, The Quiet Mind, and Creating Positive Relationships. Jerry also recorded two Nightingale-Conant best sellers of his own: Love Is Letting Go of Fear and One Person Can Make a Difference. You will hear classic selections from all of these best-selling audio programs.

But, that’s not even the best part. Also included is an interview with Jerry and Diane, discussing some of the ideas that have shaped their lives as individuals and a couple, and most importantly the ideas that have impacted scores of people around the world, over the past 40 years.

How do Jerry and Diane apply what they’ve learned to their own relationship? How has their expression of those ideas changed over the years? What do they think about current societal, cultural and global conditions?

For the first time ever, you will hear those all-new recordings right here in this audio collection.