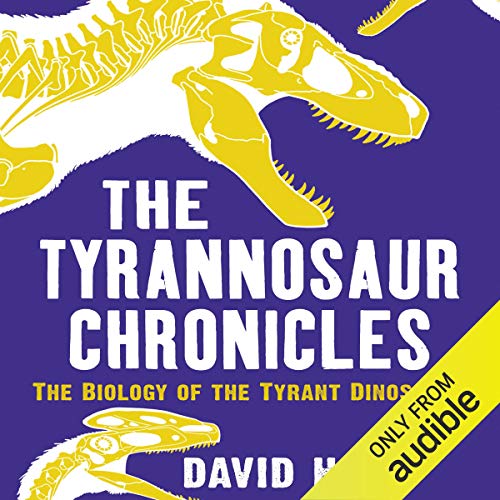 Adored by children and adults alike, tyrannosaurus is the most famous dinosaur in the world, one that pops up again and again in pop culture, often battling other beasts such as King Kong, triceratops, or velociraptors in Jurassic Park. But despite the hype, tyrannosaurus and the other tyrannosaurs are fascinating animals in their own right and are among the best-studied of all dinosaurs.

Tyrannosaurs started small but over the course of 100 million years evolved into the giant carnivorous bone crushers that continue to inspire awe in palaeontologists, screenplay writers, sci-fi novelists and the general public alike. Tyrannosaurus itself was truly impressive; it topped six tons, was more than 12 meters (40 feet) long and had the largest head and most powerful bite of any land animal in history.

The Tyrannosaur Chronicles tracks the rise of these dinosaurs and presents the latest research into their biology, showing off more than just their impressive statistics - tyrannosaurs had feathers and fought and even ate each other.

This audiobook presents the science behind this research; it tells the story of the group through their anatomy, ecology and behaviour, exploring how they came to be the dominant terrestrial predators of the Mesozoic era and, in more recent times, one of the great icons of biology.

"Dinosaurs are endlessly fascinating, and the massive, blood-thirsty tyrannosaurs are most popular (and scary) of the lot! Here, renowned dinosaur expert David Hone reveals their story, and how we know what we know about these most amazing of ancient reptiles." (Professor Mike Benton, University of Bristol)
"Without doubt, the best book on tyrannosaurs I've ever read. This is an awesome dinosaur book." (Professor Xu Xing, Chinese Academy of Sciences)