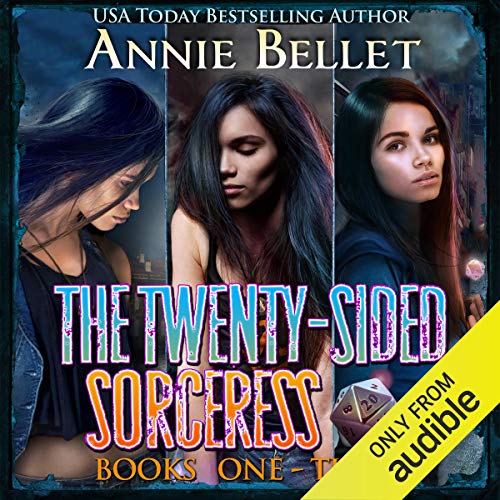 This is the omnibus of the first three books in the USA Today best-selling urban fantasy series Twenty-Sided Sorceress, collected together for the first time in one convenient volume. Fans of The Dresden Files and The Iron Druid Chronicles will enjoy this series.

Jade Crow lives a quiet life running her comic book and game store in Wylde, Idaho. After 25 years fleeing from a powerful sorcerer who wants to eat her heart and take her powers, quiet suits her just fine. Surrounded by friends who are even less human than she is, Jade figures she's finally safe.

As long as she doesn't use her magic.

When dark powers threaten her friends' lives, a sexy shape-shifter enforcer shows up. He's the shifter world's judge, jury, and executioner rolled into one, and he thinks Jade is to blame. To clear her name, save her friends, and stop the villain, she'll have to use her wits and her sorceress powers.

Except Jade knows that as soon as she does, a far deadlier nemesis awaits.

They say you can never go home again. If only that were true.

Game store owner and nerd sorceress extraordinaire Jade Crow knows death stalks her in the form of her murderous ex-lover, Samir, a sorcerer who wants to eat her heart and take her power. With the help of her friends, and sexy tiger-shifter Alek, Jade trains for the inevitable confrontation.

Until her estranged father shows up begging for help. Someone or something is murdering the crow shifters of Three Feathers ranch and her father believes sorcery is the only way to stop the killings.

Faced with an unknown foe, a family that exiled her decades before, a deepening relationship with Alek, and Samir's ever-present threat, Jade will need all the power she's gained and then some to stop the Murder of Crows.

Let sleeping dogs lie. Wolves, on the other hand.

Recovering from a broken heart and coming to terms with her family history, all sorceress Jade Crow wants is to resume running her comic book store and gaming with her friends. With a town full of strange wolf shifters, a 150-year-old peace accord hanging in the balance, and the Justice who broke her heart back in her life, Jade's plans go out the proverbial window.

Wolves are killing wolves, innocent human lives are caught in the crossfire, and not everyone in town is who they appear to be. As the bodies stack up and the doubts build, Jade and her friends race to find the true killer.

And then Jade's evil ex-lover makes another move.