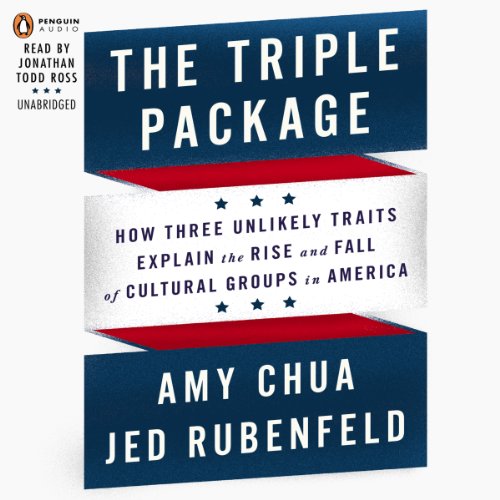 It may be taboo to say, but some groups in America do better than others. Mormons have recently risen to astonishing business success. Cubans in Miami climbed from poverty to prosperity in a generation. Nigerians earn doctorates at stunningly high rates. Indian and Chinese Americans have much higher incomes than other Americans; Jews may have the highest of all.

Why do some groups rise? Drawing on groundbreaking original research and startling statistics, The Triple Package uncovers the secret to their success. A superiority complex, insecurity, impulse control - these are the elements of the Triple Package, the rare and potent cultural constellation that drives disproportionate group success. The Triple Package is open to anyone. America itself was once a triple-package culture. It's been losing that edge for a long time now. Even as headlines proclaim the death of upward mobility in America, the truth is that the old-fashioned American Dream is very much alive - but some groups have a cultural edge, which enables them to take advantage of opportunity far more than others.

But the triple package has a dark underside too. Each of its elements carries distinctive pathologies; when taken to an extreme, they can have truly toxic effects. Should people strive for the triple package? Should America? Ultimately, the authors conclude that the triple package is a ladder that should be climbed and then kicked away, drawing on its power but breaking free from its constraints.

"In their provocative new book, Chua (Battle Hymn of the Tiger Mother) and Rubenfeld (The Interpretation of Murder) - Yale Law professors and spouses - show why certain groups in the U.S. perform better than others. According to the authors, three traits breed success: a superiority complex, insecurity, and impulse control. Only when this ‘Triple Package’ comes together does it ‘generate drive, grit, and systematic disproportionate group success.’ Supported by statistics and original research.... This comprehensive, lucid sociological study balances its findings with a probing look at the downsides of the triple package - the burden of carrying a family’s expectations, and deep insecurities that come at a psychological price." (Publishers Weekly, starred and boxed)

"Husband and wife professors at Yale Law School explore why some cultural groups in the United States are generally more successful than others. Chua and Rubenfeld argue that each of these groups is endowed with a 'triple package' of values that together make for a potent engine driving members to high rates of success...[and] that the U.S. was originally a triple-package nation. However, while Americans still view their country as exceptional, in the last 30 years, the other two parts of the package have gone out the window, replaced by a popular culture that values egalitarianism, self-esteem and instant gratification, creating a vacuum for more motivated groups to fill. On a highly touchy subject, the authors tread carefully, backing their assertions with copious notes. Though coolly and cogently argued, this book is bound to be the spark for many potentially heated discussions." (Kirkus Reviews)

"Thinkers like Chua and Rubenfeld do us a service by reaching beyond the limits of what we can quantify." (National Review Online)