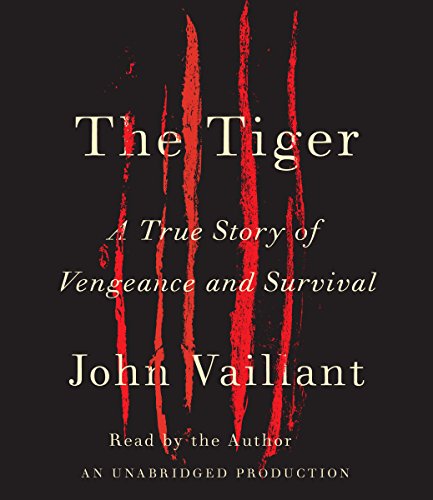 It’s December 1997, and a man-eating tiger is on the prowl outside a remote village in Russia’s Far East. The tiger isn’t just killing people, it’s annihilating them, and a team of men and their dogs must hunt it on foot through the forest in the brutal cold. As the trackers sift through the gruesome remains of the victims, they discover that these attacks aren’t random: The tiger is apparently engaged in a vendetta. Injured, starving, and extremely dangerous, the tiger must be found before it strikes again.

As he re-creates these extraordinary events, John Vaillant gives us an unforgettable portrait of this spectacularly beautiful and mysterious region. We meet the native tribes who for centuries have worshipped and lived alongside tigers, even sharing their kills with them. We witness the arrival of Russian settlers in the 19th and early 20th centuries, soldiers and hunters who greatly diminished the tiger populations. And we come to know their descendants, who, crushed by poverty, have turned to poaching and further upset the natural balance of the region.

This ancient, tenuous relationship between man and predator is at the very heart of this remarkable book. Throughout we encounter surprising theories of how humans and tigers may have evolved to coexist, how we may have developed as scavengers rather than hunters, and how early Homo sapiens may have fit seamlessly into the tiger’s ecosystem. Above all, we come to understand the endangered Siberian tiger, a highly intelligent super-predator that can grow to ten feet long, weigh more than six hundred pounds, and range daily over vast territories of forest and mountain.

Beautifully written and deeply informative, The Tiger circles around three main characters: Vladimir Markov, a poacher killed by the tiger; Yuri Trush, the lead tracker; and the tiger himself. It is an absolutely gripping tale of man and nature that leads inexorably to a final showdown in a clearing deep in the taiga.

“Suspenseful and majestically narrated.... Vaillant has written a mighty elegy that leads readers into the lair of the tiger and into the heart of the Kremlin to explain how the Amur tiger went from being worshipped to being poached.” ( Publishers Weekly)
“ The Tiger is the sort of book I very much like and rarely find.... In addition to tiger lore and scalding adventure, Vaillant shows us Russia’s far east and its inhabitants, their sometimes desperate lives interwoven with the economics of poaching and the politics of wildlife conservation. I was startled to learn about the zapovedniks and Russia’s primary place in global conservation. This is a book not only for adventure buffs, but for all of us interested in wildlife habitat preservation.” ( Annie Proulx)

Well - not a complete waste of time

I expected a more Wildlife fancied story, but the author also drifts into political and social problems. Those parts aren't that long but annoyed me a bit. In two sections I missed having a paper copy, where a list of animals are counted up which I desperatly wanted to skip but couldn't while beeing on the german highways... (Those lists were terribly long)