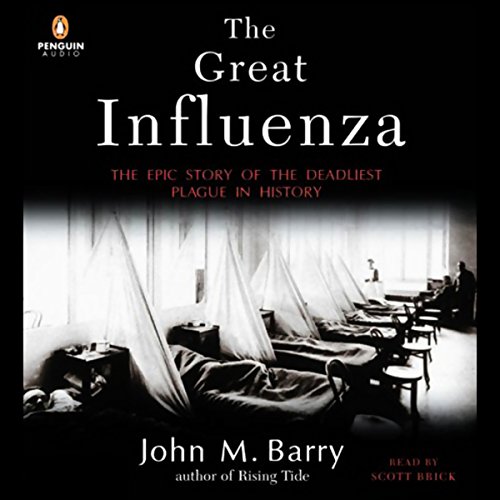 In the winter of 1918, at the height of World War I, history's most lethal influenza virus erupted in an army camp in Kansas, moved east with American troops, then exploded, killing as many as 100 million people worldwide. It killed more people in 24 weeks than AIDS has killed in 24 years, more in a year than the Black Death killed in a century. But this was not the Middle Ages, and 1918 marked the first collision between modern science and epidemic disease.

Magisterial in its breadth of perspective and depth of research, The Great Influenza weaves together multiple narratives, with characters ranging from William Welch, founder of the Johns Hopkins Medical School, to John D. Rockefeller and Woodrow Wilson. Ultimately a tale of triumph amid tragedy, this crisis provides us with a precise and sobering model as we confront the epidemics looming on our own horizon.

"Easily our fullest, richest, most panoramic history of the subject." (The New York Times Book Review)

Should be called “an American history of the great influenza”

The great influenza was a worldwide phenomenon. Whilst I appreciate the importance of a short history of the medical profession, I don’t understand why this goes into such depth and (amazingly) almost totally concentrated on the history of the American medical tradition. I stopped listening after chapter 2. Either provide a balanced review, or make clear that this is only a partial history from the perspective of the USA. Very annoying.

The man has words. lots of words. many words. words, he is unafraid to use. words he is unafraid to repeat. you will learn about early American medicine and what the people learning it liked to eat, who they socialised with, what they felt, how they cared for their petry dishes. you will wait until chapter 14 until the actual topic of the book is broached. then you will listen, repeatedly, to how scared people were. how terrified, mortified, petrified even. How even the nurses, the student nurses, the ex nurses, the retired nurses, the women who had thought about being nurses even were drafted in then fled, left, departed, chucked it in, gave up in terror, in fear, in fright.

if you enjoyed that style of writing, then this book is for you. The speaker obliges the overblown style of the book by giving every sentence a sense of breathless drama, even when describing the living quarters and preferred gentleman's club of Welch. If you want to waste 14 hours listening to something that could have been said in five - this is the book for you. If you want to learn something about the Spanish flu, read Pale Rider.

And Mr Barry should have sacked his editor. Or vice versa.

Good description what happened during that time.

I can highly recommend the book. Less because of the description of the pandemic itself, but how scientific research and medical training changed during that time. How many warning signals were overlooked or deliberately suppressed at the start of the pandemic. And what a hopeless situation this then created.

Therefore, the book is a good example of how important freedom of the press, independence of science and capable leaders are. Therefore, we have to take care that something like that does not happen again.

What can be seen as a disadvantage is that the events are described very detailed and really everyone is mentioned who deserves credit, so the book has a large scale. However, the most important things are always repeated, so that you can easily keep reading / listening after a break.