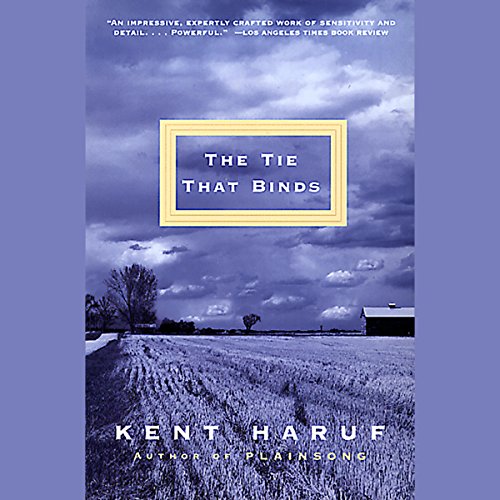 The Tie That Binds

From the best-selling author of Eventide, The Tie That Binds is a powerfully eloquent tribute to the arduous demands of rural America and of the tenacity of the human spirit.

Colorado, January 1977. Eighty-year-old Edith Goodnough lies in a hospital bed, IV taped to the back of her hand, police officer at her door. She is charged with murder. The clues: a sack of chicken feed slit with a knife, a milky-eyed dog tied outdoors one cold afternoon. The motives: the brutal business of farming and a family code of ethics as unforgiving as the winter prairie itself.

Here, Kent Haruf delivers the sweeping tale of a woman of the American High Plains, as told by her neighbor, Sanders Roscoe. As Roscoe shares what he knows, Edith's tragedies unfold: a childhood of predawn chores, a mother's death, a violence that leaves a father dependent on his children, forever enraged. Here is the story of a woman who sacrifices her happiness in the name of family - and then, in one gesture, reclaims her freedom.

"An impressive, expertly crafted work of sensitivity and detail.... Powerful." ( Los Angeles Times Book Review)
"[A] fine first novel that dramatically and accurately explores the lives of people who work the land in the stark American Middle West." ( The New York Times Book Review)
"Kent Haruf writes so wonderfully...His characters live, and the voice of his narrator reverberates after the last page: humorous, ironic, loving." ( The Christian Science Monitor)