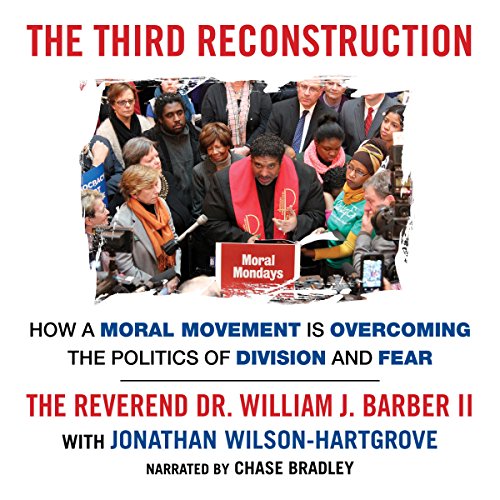 A modern-day civil rights champion tells the stirring story of how he helped start a movement to bridge America's racial divide.

Over the summer of 2013, the Reverend Dr. William J. Barber II led more than a 100,000 people at rallies across North Carolina to protest restrictions to voting access and an extreme makeover of state government. These protests - the largest state government-focused civil disobedience campaign in American history - came to be known as Moral Mondays and have since blossomed in states as diverse as Florida, Tennessee, Wisconsin, Ohio, and New York.

At a time when divide-and-conquer politics are exacerbating racial strife and economic inequality, Rev. Barber offers an impassioned, historically grounded argument that Moral Mondays are hard evidence of an embryonic third Reconstruction in America.

The first Reconstruction briefly flourished after Emancipation, and the second Reconstruction ushered in meaningful progress in the civil rights era. But both were met by ferocious reactionary measures that severely curtailed, and in many cases rolled back, racial and economic progress. This Third Reconstruction is a profoundly moral awakening of justice-loving people united in a fusion coalition powerful enough to reclaim the possibility of democracy - even in the face of corporate-financed extremism.

In this memoir of how Rev. Barber and allies as diverse as progressive Christians, union members, and immigration rights activists came together to build a coalition, he offers a trenchant analysis of race-based inequality and a hopeful message for a nation grappling with persistent racial and economic injustice. Rev. Barber writes movingly - and pragmatically - about how he laid the groundwork for a state-by-state movement that unites black, white, and brown; rich and poor; employed and unemployed; gay and straight; documented and undocumented; religious and secular. Only such a diverse fusion movement, Rev. Barber argues, can heal our nation's wounds and produce public policy that is morally defensible, constitutionally consistent, and economically sane. The Third Reconstruction is both a blueprint for movement building and an inspiring call to action from the 21st century's most effective grassroots organizer.

"Reverend William Barber and his allies are at the forefront of a new movement for justice our nation's children and families desperately need. This book presents a blueprint for moving forward together." (Marian Wright Edelman, founder of the Children's Defense Fund)
"A battle-hardened pastor calls for a faith-based, grass-roots movement for social justice.... It's the religious component that makes his story particularly interesting. Fully aware of the suspicion Bible-speak arouses in modern progressive circles, the author still insists on viewing the justice struggle through a moral prism, one always backstopped by 'a Higher Power.'" ( Kirkus Reviews)
"William Barber is the closest person we have to Martin Luther King, Jr. in our midst. His life and witness is shot through with spiritual maturity, subversive memory, and personal integrity. This book lays bare his prophetic vision, historical analysis, and courageous praxis." (Cornel West, author of Black Prophetic Fire)