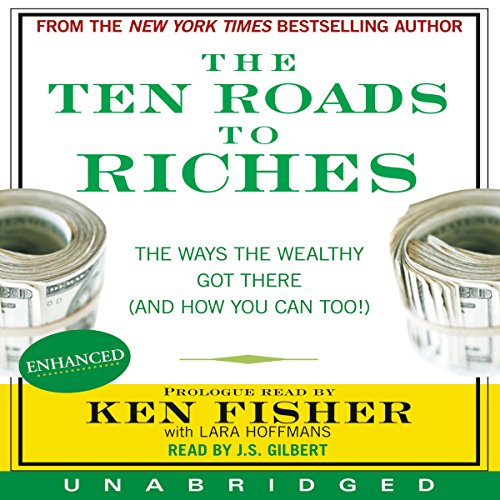 The Ten Roads to Riches

How many roads to wealth did you think there were? Ken Fisher, an American money manager and Forbes magazine columnist, thinks there are 10. He should know: he’s currently worth nearly two billion dollars. Why would such a wealthy man write such a book aimed at the non-wealthy? Because more wealthy people, he says in his self-narrated introduction, means a better world.

Performed by J. S. Gilbert (after the introduction) in the studious voice of a data-driven C.E.O., The Ten Roads to Riches make use of examples from Jay-Z to Rupert Murdoch and seeks to give you a blueprint for building extraordinary wealth of your own. The first step, it’s safe to say, is forfeiting a little cash to buy this audiobook.

Have you ever wondered how the super-rich built their wealth and whether you could do it the same way? Surprisingly, the super-wealthy usually get there by taking just one of 10 possible roads. And now, so can you!

The Ten Roads to Riches teaches you how to build wealth by following the same successful paths others have used. Renowned investment expert and self-made billionaire Ken Fisher tells you how to increase your chances of success. Throughout this work, you'll: