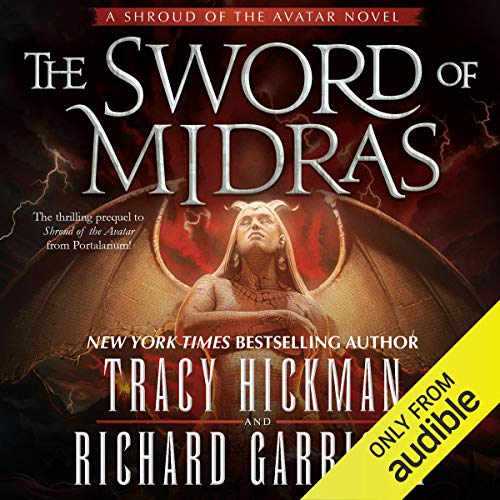 The Sword of Midras

The thrilling prequel to Shroud of the Avatar from Portalarium!

The world died during the Fall.

Abandoned by the mighty Avatars and their Virtues, the people who remained were left defenseless in an untamed land. That was until the Obsidians came. Through dark sorcery and overwhelming force, the Obsidian Empire brought order to chaos, no matter the cost.

Aren Bendis is a Captain in the Obsidian Army who has seen enough of what a world without Virtue looks like and is willing to do whatever it takes to establish a lasting peace. But after finding a magical sword that only he can wield, a sword his trusted scout, Syenna, claims is a blade once used by the legendary Avatars, Aren is thrown into a far more unfamiliar battle. One fought with whispered words and betrayal instead of swords and arrows.

Running out of allies, Aren's only hope for survival is to discover the true nature of the ancient weapon he wears at his side. In order to do that, Aren will have to turn to the empire's enemies, and in doing so he will discover what order at the hands of the Obsidians really means.

Not too good, a bit boring compared to similar books

After some Dragonlance books from Hickman I heard this one mainly because of the coauthorship with Lord British.
Finished the book but was a bit disappointed. The story is rather boring compared to the dragonlance books. It might be better, though, if you also play shroud of the avatar since it plays in the same world.