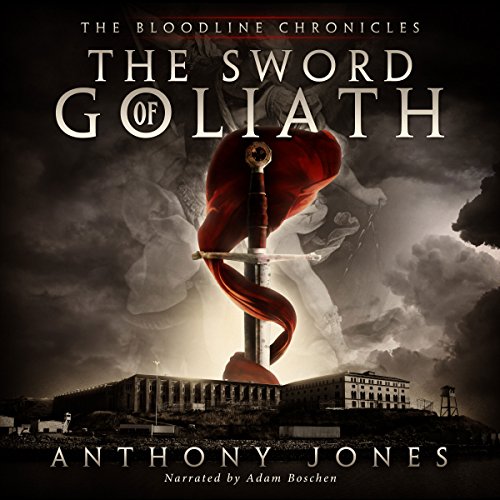 The Sword of Goliath

The Sword of Goliath focuses primarily on a man named Jacob Stanton, who is spending his days in San Quentin Penitentiary for a crime he did not commit. Jake was wrongly accused, unfairly tried, and unreasonably sentenced for the murder of his wife, and he’s just lost his final appeal.

As Jake begins to mentally prepare for life inside the walls of San Quentin, he’s assigned a new cell-mate, Stephen Stross. Stross befriends Jake and, in earning Jake’s trust, convinces him that he is a member of the Shaddai. The Shaddai, descendants of the Biblical Nephilim through the bloodline of Seth, are on the hunt for twelve artifacts that will help them to win the final battle over the demonic Grigori; they believe the key to finding one of these powerful artifacts, the sword of Goliath, rests inside the mind of Jake Stanton.

After engineering a successful escape from San Quentin, Jake and Stephen begin the quest for the legendary lost sword, but it will not be an easy effort. As escaped convicts, they are on the run from the law; as Shaddai, they are the targets of the Grigori and its evil under-lord Zoltar. Jake is going to need every resource imaginable, from skeptical law enforcement agent Sam Jericho, to prophets of the Old Testament, to the hand of God Himself. The final battle has begun not only in this world but in other unseen dimensions, and Jake Stanton may be the catalyst for victory or the harbinger of doom.

For those who enjoy stories spun out of Biblical speculation, there is much to love about The Sword of Goliath. Foremost is the fact that the cornerstone of this novel is based around a true mystery of the Bible, the fate of the Nephilim. Whereas Brown’s The Da Vinci Code and Knox’s The Genesis Secret rely on heavily debunked assertions to support fallacious premises, Anthony Jones contrives this tale around a piece of scripture that, across millennia, has yet to be fully explained or understood.