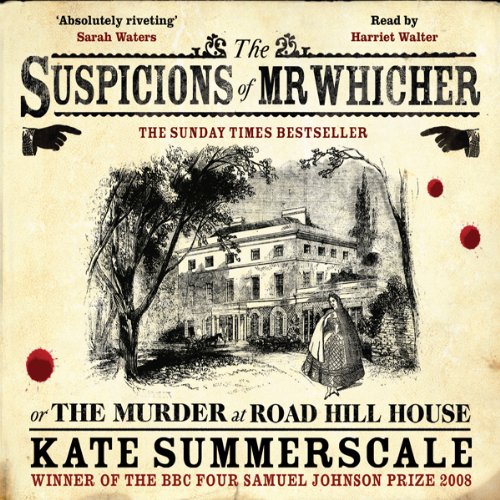 The Suspicions of Mr Whicher

This fascinating story of a famous Victorian murder case - and the notorious detective who solved it - won of the 2008 Samuel Johnson Prize for Non-Fiction.

It is a summer's night in 1860. In an elegant detached Georgian house in the village of Road, Wiltshire, all is quiet. Behind shuttered windows, the Kent family lies sound asleep. At some point after midnight, a dog barks.

The family wakes the next morning to a horrific discovery: an unimaginably gruesome murder has taken place in their home. The household reverberates with shock, not least because the guilty party is surely still among them.

Jack Whicher of Scotland Yard, the most celebrated detective of his day, reaches Road Hill House a fortnight later. He faces an unenviable task: to solve a case in which the grieving family are the suspects.

The murder provokes national hysteria. The thought of what might be festering behind the closed doors of respectable middle-class homes - scheming servants, rebellious children, insanity, jealousy, loneliness and loathing - arouses fear and a kind of excitement. But when Whicher reaches his shocking conclusion, there is uproar and bewilderment.

A true story that inspired a generation of writers, such as Wilkie Collins, Charles Dickens and Arthur Conan Doyle, this has all the hallmarks of the classic murder mystery: a body, a detective, a country house steeped in secrets. In The Suspicions of Mr Whicher, Kate Summerscale untangles the facts behind this notorious case, bringing it back to vivid, extraordinary life.

"It is a beautiful piece, written with great lucidity and respect for the reader, and with immaculate restraint. A classic, to my mind, of the finest documentary writing." (John le Carré)
"Summerscale has constructed nothing less than a masterpiece.... The Suspicions of Mr Whicher is at one and the same time a crime thriller, a sociological history, a biography and a fascinating essay on the nature of investigation....My shelves are stacked with books about crime, but none more satisfying than this." (Craig Brown, The Mail on Sunday)
"(A) pacy analysis of a true British murder case from 1860, the unravelling of which involved one of the earliest Scotland Yard detectives and inspired sensation novelists such as Dickens and Wilkie Collins by exposing the dark secrets of the Victorian middle-class home. Absolutely riveting." (Sarah Waters)
"[A] fastidious reconstruction and expansive analysis of the Road Hill murder case...Summerscale smartly uses an energetic narrative voice and a suspenseful pace, among other novelistic devices, to make her factual material read with the urgency of a work of fiction. What she has constructed, specifically, is a traditional country-house mystery, more brutal than cozy, but presenting the same kind of intellectual puzzle as her fictional models and adorned, as such books once were, with wonderfully old-fashioned maps, diagrams, engravings, courtroom sketches and other illustrations...More important, Summerscale accomplishes what modern genre authors hardly bother to do anymore, which is to use a murder investigation as a portal to a wider world. When put in historical context, every aspect of this case tells us something about mid-Victorian society...The author's startling final twist both vindicates her fallen hero and advances an 'aggressive' attack on moral hypocrasy in his day and ours." (Marilyn Stasio, New York Times Book Review)
"Sparse, melancholy, beautifully written ... the year'...

Great story, but could do without the accents

The story was well written and while very detailed it’s was still possible to follow along the murder mystery. The account of the murder and investigation was researched very well and the additional information about the time and era of this murder contextualised the whole thing perfectly.
Only criticism: the speaker every now and then when quoting non English source, for example Freud, made the questionable choice of using an accent that was supposed to imitate the accent of the original source. I found that rather annoying and irritating.
Besides that it is abfresst audiobook.