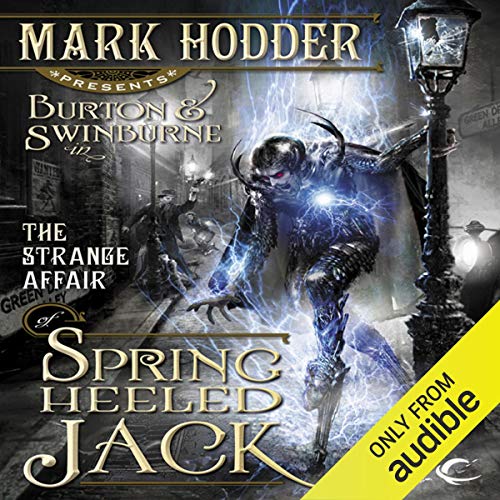 Sir Richard Francis Burton is an explorer, linguist, scholar, and swordsman. His reputation has been tarnished, his career is in tatters, and his former partner is missing and probably dead. Algernon Charles Swinburne is an unsuccessful poet and follower of de Sade, for whom pain is pleasure and brandy is ruin. They stand at a crossroads in their lives, and are caught in the epicentre of an empire torn by conflicting forces: Engineers transform the landscape with bigger, faster, noisier, and dirtier technological wonders; Eugenicists develop specialist animals to provide unpaid labour; and Libertines oppose repressive laws and demand a society based on beauty and creativity, while the Rakes push the boundaries of human behaviour to the limits with magic, drugs, and anarchy.

The two men are sucked into the perilous depths of this moral and ethical vacuum, when Lord Palmerston commissions Burton to investigate assaults on young women committed by a weird apparition known as Spring Heeled Jack, and to find out why werewolves are terrorizing London's East End. Their investigations lead them to one of the defining events of the age, and the terrifying possibility that the world they inhabit shouldn’t exist at all.

I would and I did. But I would ask beforehand if that person was into steampunk. Because while this is a wonderful audiobook I really love, the story is not an easy one and as a first in the steampunk genre I wouldn't recommend it.

Burton. I liked how he stood at a crossroads and could go either way, how he believably considered both options and how - after he mady up his mind - defended his decision with rather radical measures in the end. He was not the classical good guy, but he was believable and I found I could relate to him and his reasons.

He is a wonderful narrator and I think this book not have been narrated any better. I sure as hell will buy the other books in the series.

Yes, but that would not have done me any good. The story is rather complex and narrated not in chronological order of events so there was some need to pause every now and again to really gather what had happend so far.

While this audiobook is not totally easy it also is nothing of the really advanced stuff either. The vocabulary is advanced but not to high and Doyle's pronounciation is very clear and easy to understand. So with a solid knowledge of the English language one should understand this easy enough. One should however be into steampunk and open to some rather radical concepts of the genre to fully enjoy this one.