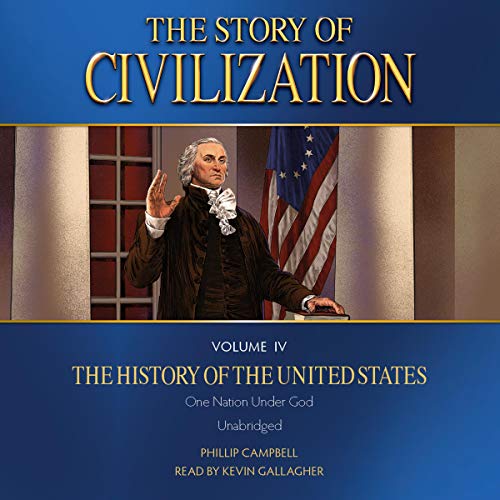 The Story of Civilization: Vol. 4 - The History of the United States

Children shouldn't just learn about history, they should live it. In The Story of Civilization, author Phillip Campbell's expert storytelling brings history to life like never before.

The Story of Civilization presents world history as a thrilling and compelling narrative. In each chapter, children encounter short stories placing them directly in the shoes of historical figures, both famous and ordinary, as they live through legendary battles, philosophical debates, fascinating discoveries and inventions, and the exploration of the world.

Have you always wanted your children to learn history from a Catholic perspective? Here, you have the trusted resource you’ve always wanted.

Volume IV: The History of the United States brings the journey to the New World, telling our nation’s thrilling tale. From Columbus’ voyage to the present day, children will meet saints like Juan Diego, Isaac Jogues and Elizabeth Ann Seton, explorers like Lewis & Clark and Neil Armstrong, and a host of US presidents. They'll relive our nation’s most historic events: the signing of the Declaration of Independence, President Lincoln’s assassination, the Civil Rights Movement, the attack on Pearl Harbor, and many more.

Embark on the journey now to learn all this and more! Talented voice actor Kevin Gallagher returns to complete The Story of Civilization, following his immensely popular readings of the series’ first three volumes, and both volumes of TAN Books’ The Story of the Bible.

Das sagen andere Hörer zu The Story of Civilization: Vol. 4 - The History of the United States