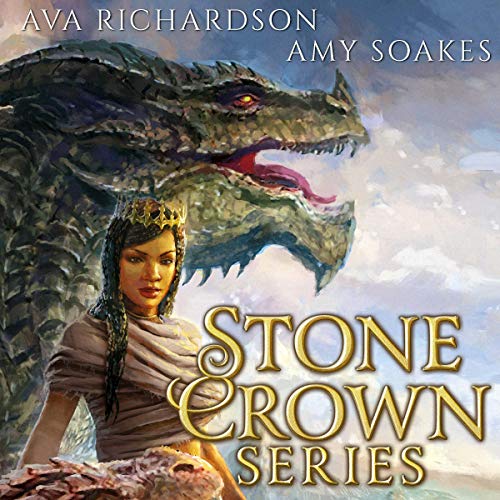 The wearer of the Stone Crown can wield unlimited power - if it can be found.

A new evil creeps across the land of Torvald and its Three Kingdoms, where folktales are nearly all that remains of the glorious dragons’ victorious past. Inyene, a ruthless noblewoman of the Northern Kingdom, enslaves villagers and plunders valuable resources to power mechanical dragons. With them, she’ll conquer her rivals’ territories, ascend the high throne, and unite the realms under a single crown.

But all is not yet lost when there are those brave enough to fight. Hope rests on the shoulders of 16-year-old Narissea, who dreams of escaping her shackles and the injured dragon she rescues. What they discover in an ancient shrine holds the key to Narissea’s plans to free her people and puts her in Inyene’s sights.

Intrigue, war, and betrayal consume the land, while in the air dragons fly. Failure to stop Inyene will doom the kingdoms. But even in victory, Narissea may be forced to sacrifice the one thing she wants above all: her freedom.

The Stone Crown box set features Dragon Connection, Dragon Quest, and Dragon Freedom. Queen of the Dragons, Ava Richardson, invites you to immerse yourself in a dragon-filled world with epic magic, fearless characters and, at its heart, and the deep bond between dragon and rider.