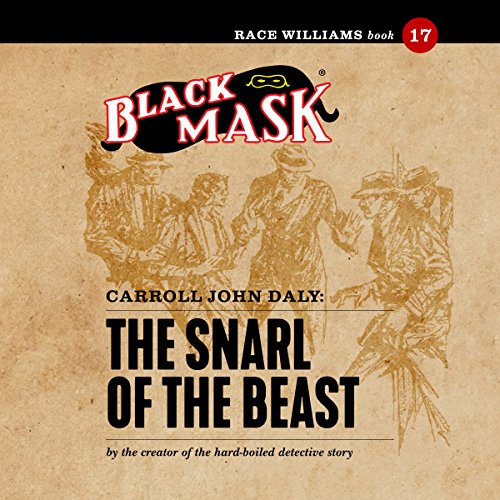 The Snarl of the Beast: Race Williams #17 (Black Mask)

Who is the criminal known only as "The Beast?" Too baffling for the police to solve, it becomes a manhunt in which detective Race Williams must track down "the most feared, the cunningest and cruelest creature that stalks the city streets at night."

But it will soon become Race's most dangerous case as he tries to stay alive. One of the longest and best of the dozens of Race Williams adventures.

Story 17 in the Race Williams series.

Carroll John Daly (1889 - 1958) was the creator of the first hard-boiled private eye story, predating Dashiell Hammett's first Continental Op story by several months. Daly's classic character, Race Williams, was one of the most popular fiction characters of the pulps, and the direct inspiration for Mickey Spillane's Mike Hammer.

This Black Mask Classic Edition was produced by Pulp-Lit Productions Studios for Steeger Properties LLC, agent for the estate of Carroll John Daly.