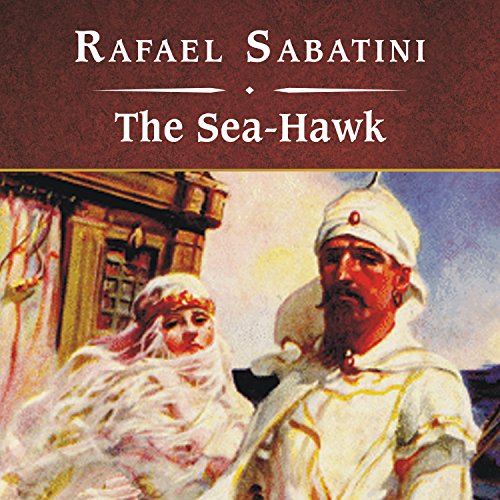 Rafael Sabatini's The Sea-Hawk tells the story of an Elizabethan Englishman who, after being betrayed by his half-brother and sold into slavery, joins the swashbuckling pirates of the Barbary Coast. Historic and melodramatic, this audiobook chucks listeners right into the middle of the action. John Bolen turns in a solid performance. He is not afraid to pause to let the imagery settle, nor to use rapid-fire pacing to bolster action sequences. He particularly hits his stride with his characters' voices, from the high-pitched women to the heavily accented pirates. For fans of good old-fashion melodrama, X marks this spot.

Sir Oliver Tessilian, a Cornish nobleman, is abandoned or betrayed by everyone he ever loved. He is framed for murder, affronted and shunned by his fiancee and sold into slavery by his half-brother.

Tessilian converts to Islam and becomes the Barbary Corsair, Sakr-el-Bahr, "Hawk of the Sea." He invades the coast of England on a captured Spanish ship and kidnaps the woman whose love for him had been poisoned by deceit and whose unforgiving repugnance had kept him form returning home. This 1923 best seller, doused with pirates, sea battles, villainy, romance and revenge, is considered one of the great classic swashbucklers of all time.