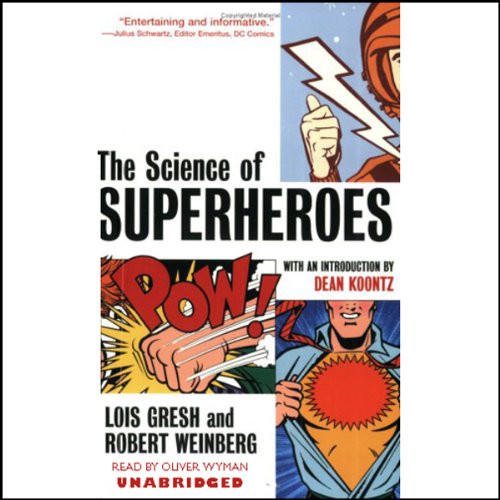 The Science of Superheroes

The Science of Superheroes takes a lighthearted but clear-headed look at the real science that underlies some of the greatest superhero comic books of all time, including Spider-Man, Batman, Fantastic Four, and many more. Each chapter presents the story of the origin of one or more superheroes and asks intriguing questions that lead to fascinating discussions about the limits of science, the laws of nature, and the future of technology.

If gamma rays can’t turn a 128-pound weakling into the Incredible Hulk, what could? Are Spider-Man’s powers really those of a spider? Could a person ever breathe water like a fish? From telepathy to teleportation, from cloning to cosmic rays, this vastly entertaining romp through the nexus of science and fantasy separates the possible from the plausible and the barely plausible from the utterly ridiculous.

With an introduction by author Dean Koontz.


Lois Gresh has written dozens of suspense and science fiction stories, and has been nominated for national fiction awards six times. She is coauthor, along with Robert Weinberg, of The Computers of Star Trek.
Robert Weinberg's fiction has been nominated for Hugo, World Fantasy, and Balrog Awards. He is a two-time winner of the World Fantasy Award as well as the recipient of a Bram Stoker Award. Weinberg also writes the comic book series Cable for Marvel Comics. He previously served for 24 years as chairman of the Chicago Comicon, the second-largest comic convention in the United States.
Oliver Wyman is a founding member and associate director of New York City's Collective: Unconscious Theater. As an actor, he has appeared in many plays and several independent films. As a voice-over artist, he has recorded everything from cartoons to language programs. Oliver can also be heard reading The Best Business Stories of the Year, 2002 and The Joy of Pi, both available from Random House Audible.
©2002 by Lois Gresh and Robert Weinberg
(P)2002 Random House Inc.
Popularkultur Wissenschaft
Mehr anzeigen Weniger anzeigen

"Weinberg and Gresh tell it like it is - and how it would be, if our favorite comic book characters actually existed. The Science of Superheroes is a fascinating and entertaining examination of everything from astrophysics to genetic biology to the evolution of the 'superhero.'" (Mark Powers, editor, X-Men and Uncanny X-Men)