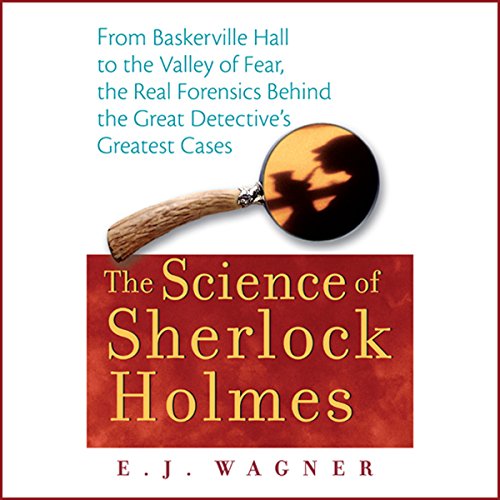 The Science of Sherlock Holmes

The Science of Sherlock Holmes

The Science of Sherlock Holmes is a wild ride in a hansom cab along the road paved by Sherlock Holmes—a ride that leads us through medicine, law, pathology, toxicology, anatomy, blood chemistry, and the emergence of real-life forensic science during the 19th and 20th centuries.

From the "well-marked print of a thumb" on a whitewashed wall in "The Adventure of the Norwood Builder" to the trajectory and impact of a bullet in "The Reigate Squires", author E. J. Wagner uses the Great Detective's remarkable adventures as springboards into the real-life forensics behind them.

You'll meet scientists, investigators, and medical experts, such as the larger-than-life Eugène Vidocq of the Paris Sûreté, the determined detective Henry Goddard of London's Bow Street Runners, the fingerprint expert Sir Francis Galton, and the brilliant but arrogant pathologist Sir Bernard Spilsbury. You'll explore the ancient myths and bizarre folklore that were challenged by the evolving field of forensics and examine the role that brain fever, Black Dogs, and vampires played in criminal history.

Real-life Holmesian mysteries abound throughout the book. What happened to Dr. George Parkman, wealthy physician and philanthropist, last seen entering the Harvard College of Medicine in 1849? The trial included some of the first expert testimony on handwriting analysis on record—some of it foreshadowing what Holmes said of printed evidence years later in The Hound of the Baskervilles, "But this is my special hobby, and the differences are equally obvious."

Through numerous cases, including celebrated ones such as those of Jack the Ripper and Lizzie Borden, the author traces the influence of the coolly analytical Holmes on the gradual emergence of forensic science from the grip of superstition. You'll find yourself listening to The Science of Sherlock Holmes as eagerly as you would those of any Holmes mystery.

"E. J. Wagner demonstrates that without the work of Sherlock Holmes and his contemporaries, the CSI teams would be twiddling their collective thumbs. Her accounts of Victorian crimes make Watson's tales pale! Highly recommended for students of the Master Detective." (Leslie S. Klinger, Editor, The New Annotated Sherlock Holmes)
"What really makes The Science of Sherlock Holmes stand out is Wagner's easy and engaging style. The book reads like a series of highly entertaining and informative lectures making the subject matter accessible to both the layman and serious student alike... Bottom line: An absolute must-have addition to the Sherlockian non-fiction shelf that is highly recommended to the general reader, Sherlockian and even, dare I say it, CSI fan." (Charles V. Prepolec, Sherlock magazine)

"interesting, informative, and even enlightening." ( AudioFile)