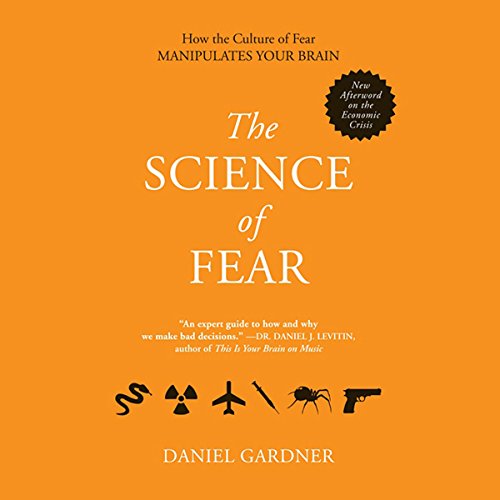 The Science of Fear

Why We Fear the Things We Should Not - and Put Ourselves in Great Danger
Autor: Daniel Gardner
Sprecher: Scott Peterson
Spieldauer: 12 Std. und 8 Min.
Kategorien: English - Nonfiction, Social Sciences
4.5 out of 5 stars 4,7 (3 Bewertungen)

The Science of Fear

From terror attacks to the War on Terror, bursting real-estate bubbles to crystal meth epidemics, sexual predators to poisonous toys from China, our list of fears seems to be exploding. And yet, we are the safest and healthiest humans in history. Irrational fear is running amok, and often with tragic results. In the months after 9/11, when people decided to drive instead of fly - believing they were avoiding risk - road deaths rose by 1,595. Those lives were lost to fear.

The Science of Fear is a disarmingly cheerful roundtrip shuttle to the new brain science, dissecting the fears that misguide and manipulate us every day. As award-winning journalist Daniel Gardner demonstrates, irrational fear springs from how humans miscalculate risks. Our hunter-gatherer brains evolved during the old Stone Age and struggle to make sense of a world utterly unlike the one that made them. Numbers, for instance, confuse us. Our "gut" tells us that even if there aren't "50,000 predators...on the Internet prowling for children," as a recent U.S. Attorney General claimed, then there must be an awful lot. And even if our "head" discovers that the number is baseless and no one actually knows the truth - there could be 100,000 or 500,000 - we are still more fearful simply because we heard the big number. And it is not only politicians and the media that traffic in fearmongering. Corporations fatten their bottom lines with fear. Interest groups expand their influence with fear. Officials boost their budgets with fear. With more information, warnings and scary stories coming at us every day from every direction, we are more prone than ever to needlessly worry.

"Excellent.... analyses everything from the media's predilection for irrational scare stories to the cynical use of fear by politicians pushing a particular agenda....What could easily have been a catalogue of misgovernance and stupidity instead becomes a cheery corrective to modern paranoia." ( The Economist)