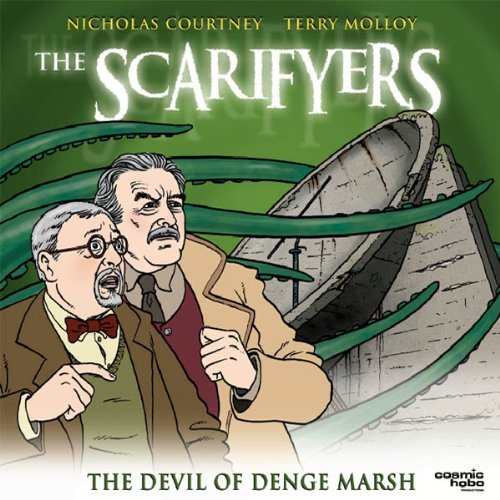 The Scarifyers: The Devil of Denge Marsh

The Scarifyers is a series of rip-roaring tales of comedic supernatural intrigue set in 1930s Britain, distilling the likes of Dick Barton, The Avengers, The Devil Rides Out and Quatermass into cracking audio adventures.

The series is broadcast on BBC Radio 4 Extra, and has been described in the national press as 'rollicking good fun', 'a slice of audio perfection', 'the smartest and most enjoyable thing on British radio' and 'like Tintin but with the lights out.'

This is the second Scarifyers adventure. A melting minister... a scientific project gripped by madness... a remote village on the Kent coast where the locals have some strange habits indeed. It's all just the ticket for top-secret government department, MI-13.Lionheart (Nicholas Courtney) and Dunning (Terry Molloy) are back; to do battle with the Women's Institute, and old adversary and an inter-dimensional being from the dawn of time - The Devil of Denge Marsh.