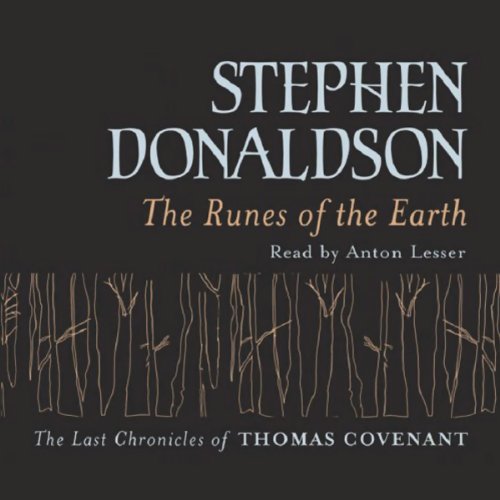 The Runes of the Earth

In 1977, Stephen Donaldson changed the face of epic fantasy with the publication of The Chronicles of Thomas Covenant the Unbeliever. Thomas Covenant is struck down with a disease believed eradicated; he is abandoned by his wife and son and becomes a pariah. Alone and despairing, Covenant falls, and is drawn into a mysterious new world, where gentle people work magic and the earth itself brings healing. He is welcomed as the reincarnation of a legendary saviour, but Covenant refuses to believe. At the end of the sixth book, as Covenant battles to save the world, he is killed, in both worlds, as Dr. Linden Avery, his horrified companion, looks on.

Now comes the book every fantasy reader has been waiting for. It's 10 years later, and Linden Avery thought she would never see the Land, or Covenant, again. But Lord Foul has stolen her adopted son, and is unmaking the very laws of nature. And though she believes Covenant dead, he keeps sending Linden messages: "Find me", and "Don't trust me". The Land is in turmoil, and Lord Foul has plans for them all.

Das sagen andere Hörer zu The Runes of the Earth

A must for friends of The Land

If you know the first two chronicles this is a must. Faithfull to 'The Land' Donaldson returns the reader/listener to a time, set millennia after the creation of the second Staff of Law. Old friends and new allies rally around Linden Avery on the quest to save The Land and her son.