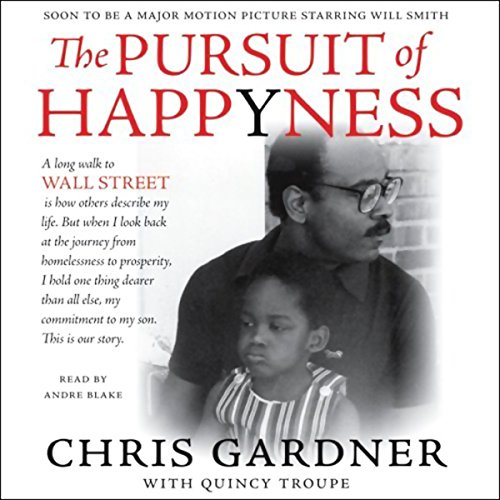 The Pursuit of Happyness (Abridged)

Andre Blake tells the true story of Chris Gardner, a Milwaukee African-American who escaped from his ex-convict mother and violent stepfather by joining the Navy and then becoming a San Francisco stockbroker, only to wind up as a homeless single father of a 19-month-old son. Read by the street-smart Blake, the story's colorful language and no-holds-barred humor make it captivating. It's a happy-ending morality tale that shows how ironclad determination can break negative cultural cycles and lead to financial and personal rewards. Beleaguered men from all dysfunctional circumstances will be inspired by the well-told story of this authentic American life. Few will forget it once they hear it.

The astounding yet true rags-to-riches saga of a homeless father who raised and cared for his son on the mean streets of San Francisco and went on to become a crown prince of Wall Street.

At the age of 20, Chris Gardner arrived in San Francisco to pursue a promising career in medicine. However, he surprised everyone and himself by setting his sights on the competitive world of high finance. Yet no sooner had he landed an entry-level position at a prestigious firm, Gardner found himself caught in a web of incredibly challenging circumstances that left him part of the city's working homeless with his toddler son. Motivated by the promise he made to himself as a fatherless child to never abandon his own children, the two spent almost a year moving from shelters, "HO-tels", and soup-lines.

Never giving in to despair, Gardner makes an astonishing transformation from being part of the city's invisible to being a powerful player in its financial district. Here is the story of a man who breaks his own family's cycle of men abandoning their children, a story that appeals to the very essence of the American Dream.

"Gardner is honest and thorough as he solidly depicts growing up black and male in late 20th-century urban America." ( Publishers Weekly)