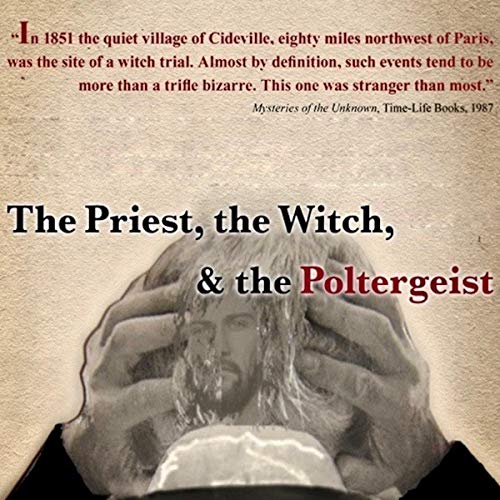 The Priest, the Witch & the Poltergeist

The Priest, the Witch and the Poltergeist is based on an incredible true story.

It was late autumn, 1850, in the little farming town of Cideville, France. Seeking revenge for the jailing of his coven leader, a male witch named Thorel cast a hex upon two boys who lived with Father Jean Lariat, the parish priest. Immediately strange noises began in Lariat's parsonage. He forced Thorel to apologize to the boys. The local seigneur and an amateur scientist devised experiments to determine the poltergeist's source - without success. Lariat and another priest tried an exorcism - without success. A well-known occultist, the Marquis de Foursin, came from Paris to hold a séance.

Nothing worked. The house began to crumble.

Finally Father Lariat, half-crazed by the relentless noise, went to the farm where Thorel worked as a shepherd and beat him to a pulp. But Thorel, bloody and broken, struggled to his feet and pronounced upon Lariat the most modern of hexes: "I sue you. I sue you for slander and assault".

What followed was history's only known trial where a witch was the plaintiff, not the defendant. The priest who helped with the exorcism testified at the time: "I say that the noises seemed to me so extraordinary that I would vouch for them with my blood. I could not wait to leave that horrible place".