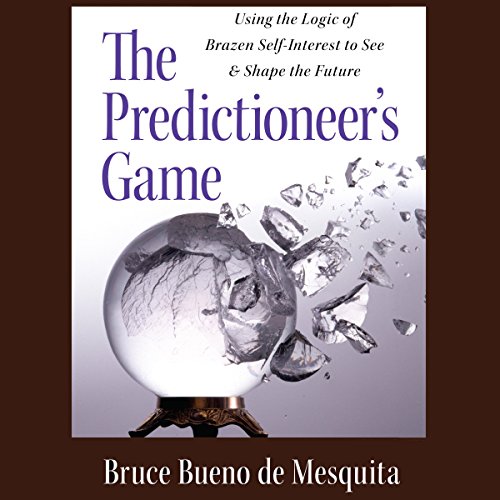 Bruce Bueno de Mesquita is a master of game theory, which is a fancy label for a simple idea: People compete, and they always do what they think is in their own best interest. Bueno de Mesquita uses game theory and its insights into human behavior to predict and even engineer political, financial, and personal events. His forecasts, which have been employed by everyone from the CIA to major business firms, have an amazing 90-percent accuracy rate, and in this dazzling and revelatory book he shares his startling methods and lets you play along in a range of high-stakes negotiations and conflicts.

Revealing the origins of game theory and the advances made by John Nash, the Nobel Prize-winning scientist perhaps best known from A Beautiful Mind, Bueno de Mesquita details the controversial and cold-eyed system of calculation that he has since created, one that allows individuals to think strategically about what their opponents want, how much they want it, and how they might react to every move.

From there, Bueno de Mesquita games such events as the North Korean disarmament talks and the Middle East peace process and recalls, among other cases, how he correctly predicted which corporate clients of the Arthur Andersen accounting firm were most likely engaged in fraudulent activity (hint: one of them started with an E).

Looking as ever to the future, Bueno de Mesquita also demonstrates how game theory can provide successful strategies to combat both global warming and terror.

But as Bueno de Mesquita shows, game theory isn't just for saving the world. It can help you in your own life, whether you want to succeed in a lawsuit, elect the CEO of your company, or even buy a car.

Savvy, provocative, and shockingly effective, The Predictioneer's Game will change how you understand the world and manage your future. Life's a game, and how you play is whether you win or lose.

"Bruce Bueno de Mesquita has demonstrated the power of using game theory and related assumptions of rational and self-seeking behavior in predicting the outcome of important political and legal processes. No one will fail to appreciate and learn from this well-written and always interesting account of his procedures." (Kenneth Arrow, Nobel Prize-winning economist; Professor Emeritus, Stanford University)

good instruction for survival but bad advice for a "good life"

bueno de mesquita predicts the outcome of complex and dynamic political interaction with his model presuming all act rationally, this seems to work pretty well in many circumstances and is certainly instructive for decisions even though you should not base your existence on brazen self interest only!! But please also know the limitations as there are, people ever so often dont act rationally, if you dont get the input right you get garbage out and if you want to sell the result to others they better be believers. However, in a survival context or if you are desparate to win in todays life in a sharks pond you better know and act as Mesquita suggests. Find love elsewhere...