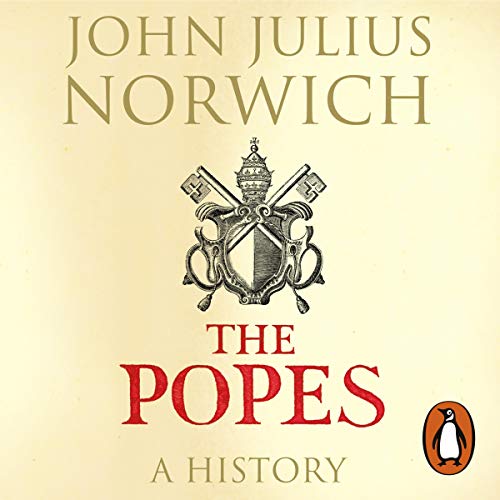 Well known for his histories of Norman Sicily, Venice, the Byzantine Empire and the Mediterranean, John Julius Norwich has now turned his attention to the oldest continuing institution in the world, tracing the papal line down the centuries from St Peter himself – traditionally (though by no means historically) the first pope – to the present Benedict XVI. Of the 280-odd holders of the supreme office, some have unques­tionably been saints; others have wallowed in unspeakable iniquity. One was said to have been a woman – and an English woman at that – her sex being revealed only when she improvidently gave birth to a baby during a papal procession. Pope Joan never existed (though the Church long believed she did) but many genuine pontiffs were almost as colourful: Formosus, for example, whose murdered corpse was exhumed, clothed in pontifical vestments, propped up on a throne and subjected to trial; or John XII of whom Gibbon wrote: 'his rapes of virgins and widows deterred female pilgrims from visiting the shrine of St Peter lest, in the devout act, they should be violated by his successor.’

Others earned respect, including Leo the Great who protected Rome from the Huns and the Goths, and Gregory the Great who struggled manfully with the emperor for supremacy. After calamitous crusades, and 70-year exile in Avignon, came the larger-than-life pontiffs of the Renassiance – the Borgias and the Medicis ('God has given us the papacy; let us now enjoy it'). Pius VII had to contend with Napoleon, Pius IX to steer the papacy through the storm of the Risorgimento. John Julius Norwich brings the story up-to-date with lively investigations into the anti-semitism of Pius XII, the possible murder of John Paul I and the phenomenon of the Polish John Paul II. From here the glories of the Byznatium to the decay of Rome, from the Albigensian Heresy to sexual misbehaviour within the Church today, the pace never slackens. John Julius Norwich, an agnostic with no religious axe to grind, has a thrilling and important tale to tell – and in this rich, authoritative book he does it full justice.